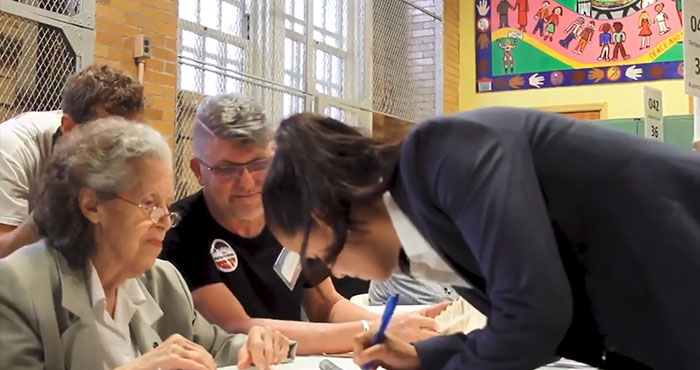 Photo Courtesy of the Cabán Campaign

Tiffany Cabán votes for herself way back on Election Day, June 25.

By Michael V. Cusenza
The wild Democratic Primary for Queens District Attorney is headed for a mandatory recount.
According to the City Board of Elections, a recount of all ballots is required when the margin of victory is less than one half of one percent of all votes. As of Wednesday afternoon, Borough President Melinda Katz held a razor-thin lead of 16 tallies over public defender Tiffany Cabán.
BOE staffers are set to start the manual recount of all 91,000 votes on Thursday at the agency’s Queens voting machine facility inside of Metro Mall in Middle Village. The process is expected to take two weeks to complete.
So how did we get here?
It seemed that Cabán, 31, pulled off a stunning upset on Election Day (way back on June 25) when the Richmond Hill native declared victory at her campaign party after noting that, at the time, she had topped Katz by 1,090 tallies. Cabán garnered 33,814 votes (39.57 percent), while Forest Hills’ Katz compiled 32,724 votes (38.30 percent).
More than 85,000 votes had been counted, with roughly 3,400 absentee ballots remaining to be calculated.
However, the borough president would not concede.
“I want everyone to know we are doing a recount,” a prescient Katz, 53, asserted at her reception in Forest Hills.
“This thing ain’t over folks,” Queens Democratic Party Chairman Greg Meeks added.
And after the absentee ballot count last Wednesday, indeed it was Katz claiming the crown.
“We said from the beginning that every vote needs to be counted and that every voter needs to be heard, and now we see clearly why this must always be the case,” Katz said in a statement after surging ahead by 16 votes. “I am proud to have been chosen as the Democratic nominee for Queens district attorney. We know that these numbers can and will be subject to recount, and there may be legal challenges, but what matters most is the will of the Queens voters.”
In a heavily Democratic borough, Katz or Cabán is expected to cruise past the GOP nominee, which as of press time is Daniel Kolgan.