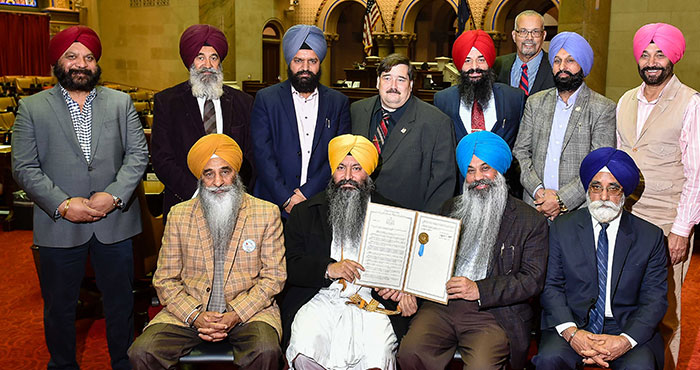 Assemblyman Mike Miller (D-Woodhaven) this year honored the Sikh community for its beneficence to the Empire State and its residents.
During the 2019 Legislative Session, Miller introduced a resolution recognizing Baisakhi, which marks the Sikh’s New Year and is one of the historically significant days of the year for Sikhs. And on the Assembly floor, the assemblyman also recognized the Sikh community of Richmond Hill, as well as the Sikh Cultural Historical Society, the Cultural Center, and members of the Guru Nanak Darbar for their “outstanding contributions” to The World’s Borough and beyond.
“Sikh-Americans make rich contributions to the social, cultural, and economic vibrancy of the United States,” Miller (back row, c.) added.
The assemblyman noted that Sikhs have been living in the U.S. for more than 100 years, and during the early 20th century thousands of Sikh-Americans worked on farms, lumber mills, and mines and on the Oregon, Pacific and Eastern railroads. Sikhism is the fifth-largest religion in the world today.