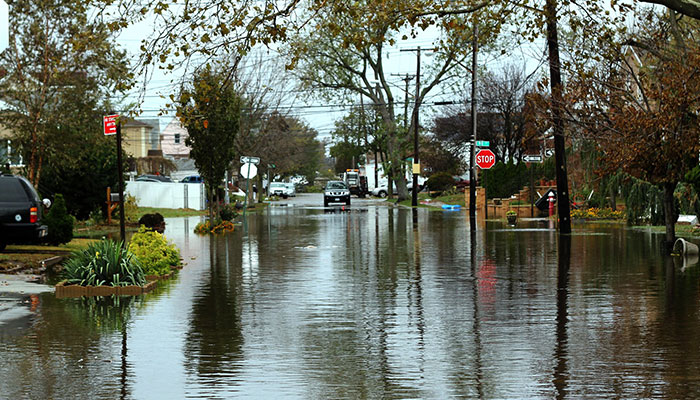 “With hurricane season already here and sea levels rising on our coasts, we must act quickly to fix the program and give Americans the relief they need,” Sen. Gillibrand said.

By Forum Staff
New bipartisan legislation recently introduced in the Senate would extend and reform the National Flood Insurance Program, U.S. Sen. Kirsten Gillibrand (D-N.Y.), an original cosponsor of the measure, announced Tuesday.
According to Gillibrand, the National Flood Insurance Program Reauthorization and Reform Act of 2019 would extend the NFIP for five years and reform the program to make it more sustainable, affordable, and efficient. The legislation would make flood insurance more affordable for policyholders, refocus the program to fund more prevention and mitigation efforts to protect properties from flood risk, reform the beleaguered claims process, and protect against the types of unscrupulous practices that defrauded New Yorkers after Superstorm Sandy.
The new measure would:
• Place protections against sudden rate shocks for policy holders and implement regulations for Federal Emergency Management Agency’s new rating methodology.
• Provide vouchers for homeowners and renters if their flood insurance premium causes their housing costs to exceed 30 percent of the Adjusted Gross Income.
• Freeze interest payments on the NFIP debt while reinvesting savings towards mitigation efforts to restore the program to solvency and reduce future borrowing.
• Provide robust funding levels for cost-effective investments in mitigation, which have a large return on investment and are the most effective way to reduce flood risk, Gillibrand said.
• Increase the maximum limit for Increased Cost of Compliance coverage and expand ICC coverage eligibility to encourage more proactive mitigation before natural disasters.
• Authorize funding for Light Detection and Ranging technology, which would help create more accurate mapping of flood risk across the country, reducing confusion and generating better data.
• Place limits on profits for private insurance companies; Write Your Own compensation policies would be capped at the rate that FEMA pays to service its own policies.
• Create new oversight measures for insurance companies and vendors and provide FEMA with greater authority to terminate contractors that have a track record of abuse.
• Fundamentally reform the claims process to level the playing field for policyholders during appeal or litigation, ban aggressive legal tactics preventing homeowners from filing legitimate claims, hold FEMA to strict deadlines so that homeowners get quick and fair payments, and end FEMA’s reliance on outside legal counsel from expensive for-profit entities.
• Provide for increased training and certification of agents and adjusters to reduce mistakes and improve the customer experience.
“Our National Flood Insurance Program is broken, and New Yorkers who live and work in coastal communities are demanding that Congress solve this problem now. With hurricane season already here and sea levels rising on our coasts, we must act quickly to fix the program and give Americans the relief they need,” Gillibrand added. “I was proud to help write this bipartisan bill to make our National Flood Insurance Program stronger, and I urge all of my colleagues to join me in fighting to pass it.”
Unless Congress acts, the NFIP will expire on Sept. 30.