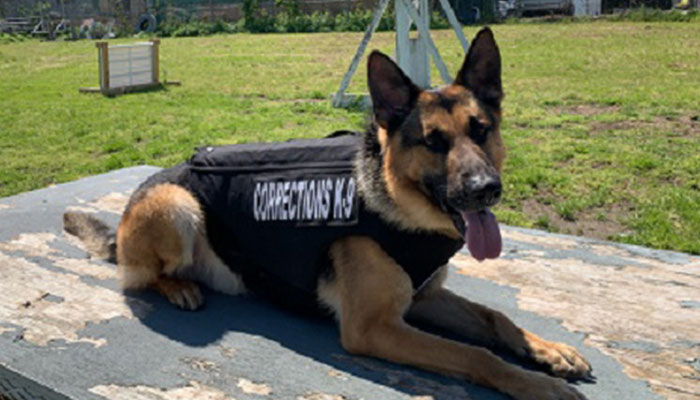 By Forum Staff
Thanks to a Massachusetts-based nonprofit, all City Department of Correction K9s have received bullet- and stab-resistant vests, DOC officials recently announced.
Vested Interest in K9s, Inc., a 501c(3) charity located in East Taunton, donated the vests to DOC K9s Rugby, Justice, Nikki, Kain, Kaos, Gunner, Zeus, Soca, Ace, Khaleesi, Ajax, Kiara, Cole, Logan, Casper, & Bane. The new gear is sponsored by the Survival Armor incentive program and embroidered with the sentiment, “This gift of protection provided by Vested Interest in K9s, Inc. and Survival Armor,” according to agency officials.
“Thanks to this donation, our K9s and their handlers are safer at work,” said Andre Cox, executive director of Canine Operations for DOC. “The vests fit well and the animals appear very comfortable wearing them.”
The donation to provide one protective vest for a law-enforcement K9 is $950, DOC noted. Each vest weighs 4-5 pounds, has a value between $1,744 and $2,283, and comes with a five-year warranty.
Vested Interest in K9s was established in 2009 to assist law enforcement agencies with this potentially lifesaving body armor for their four-legged partners. Since its inception, Vested Interest has provided more than 3,400 protective vests in 50 states, through private and corporate donations, at a value of $5.7 million dollars. The program is open to dogs actively employed in the U.S. with law enforcement or related agencies who are certified and at least 20 months of age. New K9 graduates, as well as K9s with expired vests, are eligible to participate.