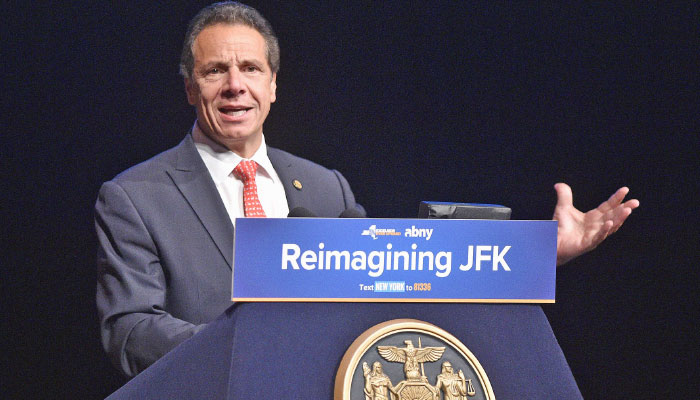 Say what you want about Gov. Andrew Cuomo, but the guy obviously hasn’t forgotten about the village that helped raise him.
As he has said in the past, Cuomo is “a Queens boy, through and through.” And seemingly proud of it. From his boyhood home in Holliswood to Archbishop Molloy High School on Manton Street in Briarwood to the unforgettable accent that always seems to sneak in to remarks a handful times at every event, you can tell that Cuomo is Queens.
You can also see the governor’s affection for The World’s Borough at John F. Kennedy International Airport. Once derided as a world-class dump, JFK is on its way to better days—and we have Cuomo to thank, in part, for that.
On Tuesday, Cuomo announced that the Port Authority of New York and New Jersey is issuing a Request for Information for the design and development of JFK Central, an approximately 14-acre, mixed-use space at the epicenter of the completely redeveloped airport. Potential uses at JFK Central include, but are not limited to: retail and dining, including pop-ups and food trucks; office space; and recreational and cultural offerings and events for airport passengers and employees.
The RFI is the latest step in Cuomo’s $13 billion vision plan for the future of JFK, unveiled in October 2018. The investment, 90 percent of which is private funding, calls for a unified and interconnected airport featuring two new international terminals with state-of-the-art passenger amenities, convenient ground transportation options, and vastly simplified roadways that will enable the airport to accommodate an expected increase of at least 15 million passengers per year.
Built on top of the brand-new Ground Transportation Center, JFK Central would be a highly visible public space located in the middle of JFK Airport, accessible from the new Terminal 1 and Terminal 4 in the southern half of the Central Terminal Area, and serving all airport passengers and employees.
Cuomo’s JFK Vision Plan—initially unveiled in January 2017 and based on the recommendations from the Governor’s Airport Advisory Panel—calls for an overhaul of the airport’s hodgepodge of eight disparate terminal sites into one unified JFK Airport by: demolishing old terminals; utilizing vacant space; modernizing on-airport infrastructure; and creating a multi-tiered cargo modernization program, while incorporating the latest in passenger amenities and technological innovations.
The Vision Plan also calls for increasing the number and size of gates, improving parking availability, an array of airside taxiway improvements to allow for bigger planes and reduced gate congestion, upgrading the AirTrain JFK system to handle increased passenger capacity, and enhanced roadways on and off the airport. This includes better access to JFK from regional roadways. The State Department of Transportation has targeted $1.5 billion in highway improvements designed to ease bottlenecks, particularly at the Kew Gardens Interchange with the Van Wyck Expressway and on the notoriously congested Van Wyck as well. The goal is to help reduce travel times for vehicles between midtown Manhattan and the airport, Cuomo has said.
“I am a New York City boy, if you can’t tell by the accent,” the governor said on Monday. “I am born and bred Queens—I have New York City in my veins, and anything New York City needs, I’m there.”
Home, sweet home.