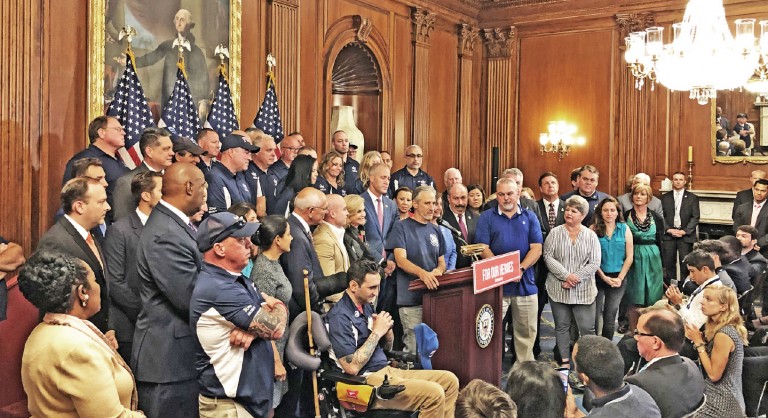 First and foremost—and forever—we say thank you to the men and women who literally sacrificed their lives for total strangers on that fateful Tuesday morning in lower Manhattan 18 years ago.
Thank you to the elected officials who ate, slept, breathed the effort to make the September 11th Victim Compensation Fund permanent. Thank you to all who voted in approval of the “Never Forget the Heroes: James Zadroga, Ray Pfeifer, and Luis Alvarez Permanent Authorization of the September 11th Victim Compensation Fund Act,” which will make the fund permanent by federal law.
“We can never thank our brave first responders enough for all they did on and in the aftermath of September 11th,” said U.S. Rep. Grace Meng (D-Flushing). “Each and every day, they put their lives on the line to keep us safe. That’s why I was proud to vote for renewing the Victim Compensation Fund today. We must never, ever turn our backs on these heroes who became sick from working at Ground Zero.”
“I’d like to say particularly: we have great 21st century heroes, whose names are Zadroga and Pfeifer and Alvarez. And I’d say to the Zadroga and Pfeifer and Alvarez families—many of whom are here—your losses, painful as they are, are not in vain, as today shows. The men you lost, and all the others, did what the Bible says we should all do: Not curse the darkness, but light a candle. And today that candle burns very, very brightly,” said Senate Minority Leader Chuck Schumer. “So, to all of our friends who made this happen, for all of us who now breathe one gigantic sigh of relief, particularly the men and women behind me: thank you. These are tough times for America. Sometimes we doubt its goodness. And it’s awfully hard to have that goodness shine through, but today it did. Thank God it did. Let it be a beacon to everyone else.
“I put on this flag: 9/12/01, I wear it every day,” Schumer continued. “It represented close to 3,000 people who were lost, and unfortunately every day this flag represents more people. But we will never take it off, as long as there are brave people who stood up for us, and this flag, and all flags will remind us that we have to stand up for them.”
City Fire Commissioner Daniel Nigro added, “I thank Congress for recognizing the bravery and sacrifices of the 200 FDNY members who have lost their lives since September 11th, and the thousands more who are battling illnesses still today. By reauthorizing the 9/11 Victim’s Compensation Fund, they have made a lifelong commitment that these men and women have earned, and truly deserve.”
Thank you, Rep. Carolyn Maloney (D-Queens, Manhattan, Brooklyn), for your tireless efforts and these beautiful words: “The true Twin Towers of New York are the FDNY and the NYPD, and fully funding and permanently authorizing the 9/11 Victim Compensation Fund is the least we can do to honor their sacrifices. I will not rest until the September 11th Victim Compensation Program is made permanent and we finally turn our promise to Never Forget into law. I hope the President signs this legislation quickly, so we can finally give these heroes the peace of mind they deserve.”
And finally, thank you, City Councilman Eric Ulrich (R-Ozone Park) for characterizing Sen. Rand Paul (R-Ky.)—one of two senators who voted “no” on the bill to make the fund permanent—so eloquently.
“Well once again, @RandPaul proves himself to be a piece of sh*t.”