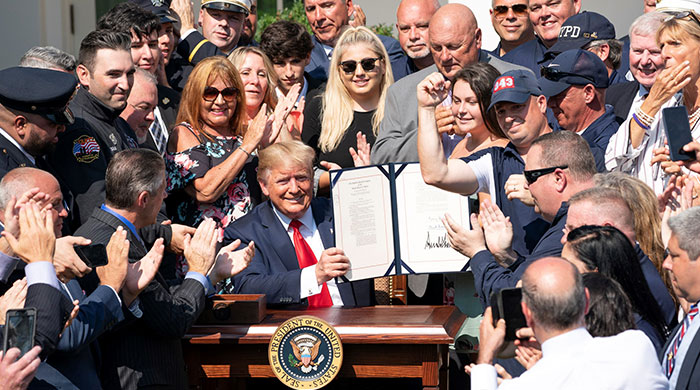 “Today, we come together as one nation to support our September 11th heroes, to care for their families, and to renew our eternal vow: Never, Ever Forget,” President Trump said.

By Michael V. Cusenza
President Donald Trump on Monday signed into law The Never Forget the Heroes: James Zadroga, Ray Pfeifer, and Luis Alvarez Permanent Authorization of the September 11th Victim Compensation Fund. The act extends the VCF’s claim-filing deadline to Oct. 1, 2090, from Dec. 18, 2020, and appropriates such funds as may be necessary to pay all approved claims.
“We have already lost too many 9/11 heroes, and sadly, many more will become sick and die in the years to come. But now, because this bill is finally the law of the land, our 9/11 first responders, survivors, and their families can finally have some peace of mind as they continue to fight through their illnesses linked to the 9/11 attacks,” Sen. Kirsten Gillibrand (D-N.Y.) said. “We will never forget the sacrifice they made for us, and I am grateful to every single person who helped pass this bill and to President Trump for signing it quickly into law.”
In February, VCF Special Master Rupa Bhattacharyya announced that due to a funding shortfall, injured and ill Sept. 11 responders and survivors would receive cuts to the awards that they were expecting of 50 percent for pending claims and 70 percent for future claims.
Trump’s signature on Monday ended award reductions and kick-started the process of restoring previously reduced awards.
“Today, we come together as one nation to support our September 11th heroes, to care for their families, and to renew our eternal vow: Never, Ever Forget,” the President said.
“This is a momentous day for the VCF and the 9/11 community, and we are extremely grateful for this show of confidence from Congress and the President,” Bhattacharyya said. “The entire VCF team is ready and eager to move forward into the next phase of this successful program with renewed energy and a reinvigorated clarity of purpose, and, as always, we remain dedicated to serving the needs of the 9/11 community.”
Senate Minority Leader Chuck Schumer added, “Finally, nothing can get in the way of our first responders getting the help they are due and they very much need. It has been a long struggle, but because of the courage of the many who joined the cause, the memory of people like James Zadroga, Ray Pfeifer, Luis Alvarez and so many others will live on in this law.”
The bipartisan legislation to make the VCF permanent was re-named last month to add Sept. 11 first responders Luis Alvarez and Ray Pfeifer, who joined NYPD Det. James Zadroga, as honorees of the bill. Gillibrand noted that the original 9/11 Health and Compensation Act and its reauthorization were named after James Zadroga, a NYPD detective who passed away from cancer and other health problems linked to his time at Ground Zero. As of July 8, the legislation also honored City Police Det. Alvarez and City Firefighter Pfeifer, who fought for the Sept. 11 bill for years and spent the last months of their lives coming to Washington to urge members of Congress to make the fund permanent.
Alvarez succumbed to cancer on Saturday, June 29. In 2009, Pfeifer was diagnosed with Stage 4 kidney cancer; he passed away on May 28, 2017.