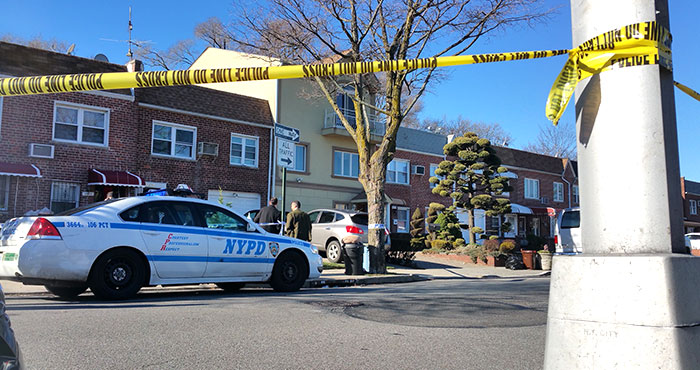 “This kind of lawless gun violence will not be tolerated in our neighborhoods,” Acting Queens DA John Ryan said.

By Forum Staff
A Brooklyn man has been sentenced to up to life in prison for the murder of a South Ozone Park man, who was killed during a home invasion attempt, Acting Queens District Attorney John Ryan announced Tuesday.
Freddie Salgado, 41, was found guilty in May of second-degree murder, first-degree burglary, second-degree criminal possession of a weapon, and second-degree assault following a two-week trial. Salgado was sentenced on Tuesday to 25 years to life in prison.
According to trial testimony, on the morning of Jan. 11, 2016, Salgado and an unapprehended other man entered the Peconic Street home of Frankie Nieves, who was upstairs helping his daughter get ready for school. Nieves’ brother, Edgar, was on the ground floor of the home and fought with the two men, who were armed with a handgun and a stun gun.
Continuing, according to trial testimony, the victim’s brother got away from the two men and ran toward the home’s entrance. As he fled the house, Edgar Nieves heard a single gunshot. Frankie Nieves, 50, was shot once in the chest. The victim was rushed to a nearby hospital, but succumbed to the wound.
Video surveillance from just outside the residence, according to trial records, showed Salgado and another person exit a white BMW, enter the Nieves house and then leave the residence. The pair got into the same vehicle and left the scene. One of the two men left a red hat at the scene and DNA collected from that hat was a match for the Salgado’s DNA profile. The defendant’s DNA profile was on file in the New York State DNA Databank.
According to trial testimony, Salgado fled the five boroughs and was apprehended in Miami in the same white BMW on Jan. 18, 2016. The vehicle had been reported stolen and the defendant was arrested and charged in connection with the stolen vehicle. The defendant gave police in Miami a false name and was released on bail. However, detectives from the NYPD’s 106th Precinct, with the assistance of Federal Marshals and local police, located the defendant, re-apprehended him and he was extradited to Queens on the murder charge. The BMW was also seized and a spot of blood was discovered in the vehicle by the NYPD Crime Scene Unit and was a match for the victim, Frankie Nieves.
“Before being brutally gunned down, the victim in this case was helping his 5-year-old daughter get dressed for school. But moments later, the defendant and another individual forced their way into the Queens home, fought with the victim’s brother and then shot and killed the 50-year-old father,” Ryan said. “This kind of lawless gun violence will not be tolerated in our neighborhoods. A jury weighed all the evidence and convicted the defendant, who is going to prison for a very long time.”