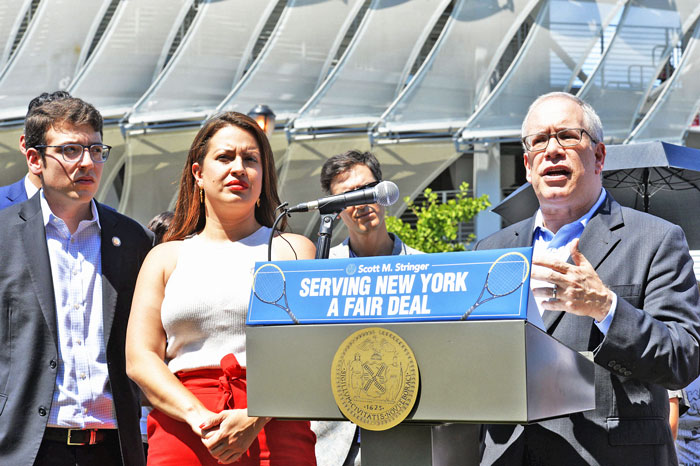 The U.S. Tennis Association National Tennis Center, which operates a 99-year lease of the home of the US Open, the USTA Billie Jean King National Tennis Center at Flushing Meadows-Corona Park, underreported at least $31 million in revenue between 2014 and 2017—and as a result, owes the City more than $311,000 for that period, an audit released Thursday by City Comptroller Scott Stringer revealed. In addition, the probe found an $8 million discrepancy in the USTA’s financial reports, indicating that an additional $82,000 could be owed to the City, according to Stringer.

The review also revealed that the City Department of Parks and Recreation, which is supposed to monitor the lease, is unable to properly do so, in part because the 1993 lease allows USTA to restrict City access to its records and impose “unreasonable hurdles” to reviewing financial records in this century, including preventing City agencies from obtaining the Tennis Center’s financial records in electronic form or making paper copies to review offsite. Parks therefore routinely accepts the Tennis Center’s financial reports at face value and lacks the resources to consistently verify their accuracy, the comptroller noted.

According to Stringer, under the USTA’s 99-year lease, the National Tennis Center pays the City an annual base rent of $400,000 plus one percent of its net gross revenues in excess of $20 million.

The audit found: the Tennis Center only acknowledges underreporting $14 million of the $31 million in underreported revenue identified by the Comptroller’s Office; and, Stringer’s auditors uncovered $256,426 in over-reported revenue—a finding with which the NTC agrees.

Stringer recommended that USTA take the following steps to rectify its lack of transparency and financial discrepancies: the National Tennis Center must pay $311,202 in additional rent to Parks; the Tennis Center should determine, with Parks, how much rent is owed to the City as a result of the $8 million discrepancy in the USTA’s financial reports; the NTC should ensure accurate reporting of annual gross revenues to Parks in compliance with the lease; it also should accurately account for all in-kind benefits received from sponsors, broadcasters, and vendors; and the Tennis Center should include all fees collected at the Tennis Center in its reports to the City.

“Any corporate entity leasing land from the City must pay its fair share of rent—no ifs, ands, or buts about it. The Tennis Center collects more than $300 million annually, and yet, it shortchanges City taxpayers,” Stringer added. “Our audit found millions in revenue that the USTA failed to report to the City and a lease that protects the USTA’s secrecy rather than promoting transparency. An organization as revenue-rich as the USTA should not be shortchanging the City. This arrangement should be a win-win, not just ‘advantage’ USTA. As a city, we want to have pride in hosting the U.S. Open every year—and that’s why I’m sounding the alarm with this audit and calling on the USTA to pay the outstanding rent it owes to New York City.”