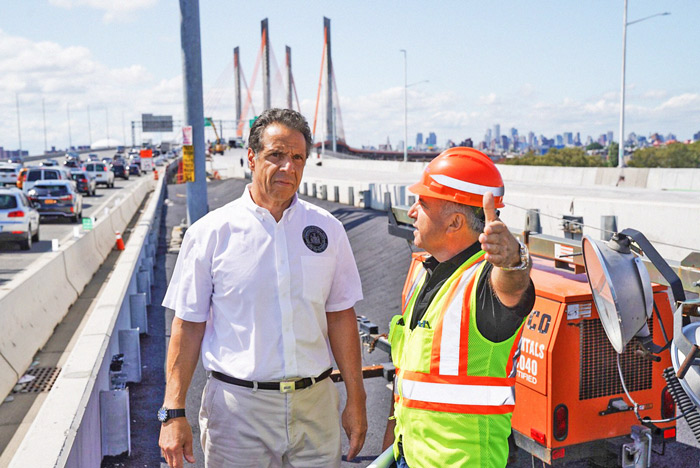 As Gov. Andrew Cuomo recently basked in the afterglow of the new Kosciuszko Bridge—completed Thursday four years ahead of schedule and on budget—City Comptroller Scott Stringer was busy penning a letter to the City Department of Transportation, spotlighting what he has characterized as a lack of protected bike lanes and walking paths on the streets leading up to the span in Maspeth and Greenpoint, Brooklyn.

The comptroller’s missive to DOT Commissioner Polly Trottenberg requests further information on the infrastructure build-out and mitigation measures that NYC DOT plan to implement that would protect the safety of both cyclists and pedestrians on and around the newly opened bridge. The letter also requests a full accounting of why upgraded bike and pedestrian infrastructure was not ready on the first day of the opening of the bridge that straddles Newtown Creek and connects Queens and Brooklyn.

“Just as no transportation department would open up a highway before constructing the on- and off-ramps, it is utterly baffling that a new bike and pedestrian path could be introduced without sufficient connecting infrastructure – on Day One,” Stringer said. “The rebuilt Kosciuszko Bridge and the new pedestrian and cycling path are critical arteries, but without protected bike lanes, sufficient lighting, and high-quality signage in the immediate vicinity, cyclists and pedestrians could be placed in harm’s way. This is a matter of life and death. At a time when the city is reeling from a spate of cyclist fatalities, a comprehensive plan must be implemented.”

“According to your office, these incidents have disproportionately taken place in primarily industrial areas that have experienced an increase in their residential population—including Greenpoint and Maspeth on either side of the new bridge,” Stringer wrote in his message to Trottenberg. “We cannot allow this trend to continue unabated, especially given the City’s commitment to zero bicycle and pedestrian deaths.”

The second span of the Kosciuszko opened to traffic just before morning rush hour Thursday. The project, which involved the first major bridge crossing constructed in the five boroughs since the Verrazzano Bridge in 1964, replaced the existing 77-year-old bridge, first opened in 1939, with two new state-of-the-art, cable-stayed bridges. The Queens-bound bridge carries five lanes of traffic and a separate Brooklyn-bound bridge carries four lanes, as well as a 20-feet-wide bikeway/walkway with views of Manhattan.

“This bridge is, of course, a critical artery in the city’s transportation infrastructure. And while I am encouraged by the inclusion of a 20-foot-wide walking and cycling path, any bike lane is only as good as its surrounding network,” Stringer added. “Without protected bike lanes, sufficient, lighting, and high quality signage in the immediate vicinity, bicycle riders and pedestrians could be placed in harm’s way.”

Last Tuesday, Cuomo also touted a new agreement that will lead to the completion of the first and second phases of “Under the K”—a project that promises turn nearly seven acres beneath the bridge in Brooklyn into a public program space and park.