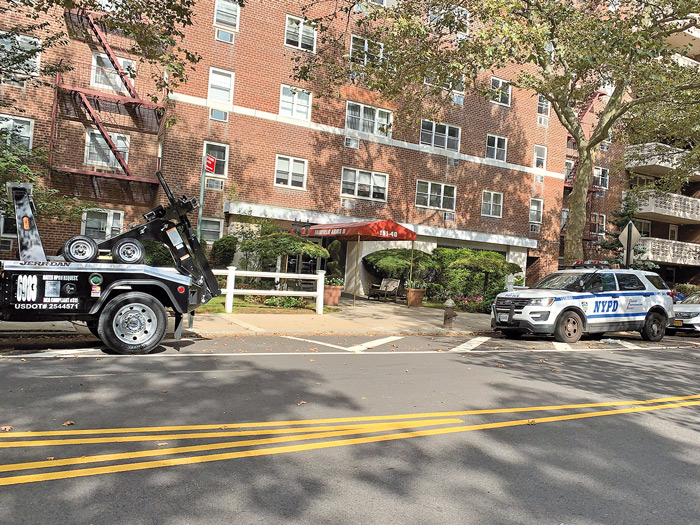 The woman was raped and robbed in this Lindenwood building on Monday, Sept. 16.

A recidivist felon has been charged with the sadistic rape and robbery of a Howard Beach woman—all while he was out on bail and fitted with an electronic monitoring device, Acting Queens District Attorney John Ryan announced Friday.

Joshua Henderson, 33, clad in a phony construction worker’s outfit, knocked on the victim’s door inside a Lindenwood co-op Monday afternoon and engaged her in a short conversation, then departed. Moments later, Henderson allegedly broke in through a window, indicated he had a gun, raped the victim, and took off with jewelry and cash.

“This was a horrible attack,” Ryan said.

According to the charges, shortly after 5 p.m. on Monday, Sept. 16, Henderson—wearing a hard hat, yellow reflective vest and work boots—knocked on the victim’s door. The woman answered and was told by Henderson that there was work being done on the roof and he instructed her to close the curtains. The woman closed her door as Henderson walked further down the apartment building’s hallway. Moments later, she spotted the hulking Henderson in her bedroom. The window off the fire escape had been opened and a fan removed from the window panel. Henderson allegedly ordered the woman to drop her cell phone and asked “Where’s the money?”

According to the complaint, Henderson grabbed documents from a safe in the victim’s bedroom and pointed a black object toward the woman and barked “This is not a joke. I’m going to shoot you.” Then he allegedly proceeded to the woman’s adult son’s room and allegedly told him “I have a gun, if you don’t want to be hurt, then don’t do anything stupid.” Henderson allegedly tied up both the woman and her son and then grabbed jewelry, cash and other items from the residence and put the items inside a red backpack.

However, instead of just leaving with the merchandise, Henderson allegedly told the woman she had three choices: “I can choke you and kill you with this pillow; you can have sex with me; or I will force you to have sex with your son.”

Henderson then allegedly forced the horrified woman’s son, 25, into a nearby bathroom, restrained him and locked him inside and then allegedly raped the woman. Henderson is allegedly seen on surveillance video—in the construction worker’s outfit—leaving the woman’s residence.

Some of the victim’s neighbors called The Forum appalled at the actions of members of the co-op’s board of directors and management following the ordeal. In one of two notes issued to shareholders, co-op officials claimed “the intruder gained entry into the building by piggybacking behind someone coming in,” when, in fact, Henderson gained entry via a fire escape and window. Also, building leaders informed shareholders that the perpetrator was dressed as a cable TV technician. Henderson wore the construction garb for the duration of his time in and around the co-op.

One Lindenwood resident who requested that The Forum not divulge her identity was particularly incensed over what she described as the board of directors’ insensitivity throughout the delicate matter and apparent transparent actions to try to distance themselves –and the building—from the incident .

“The board has done nothing for [the victims],” the woman said. “I’m ashamed to have lived there.”

If convicted, Henderson faces up to 25 years in prison.