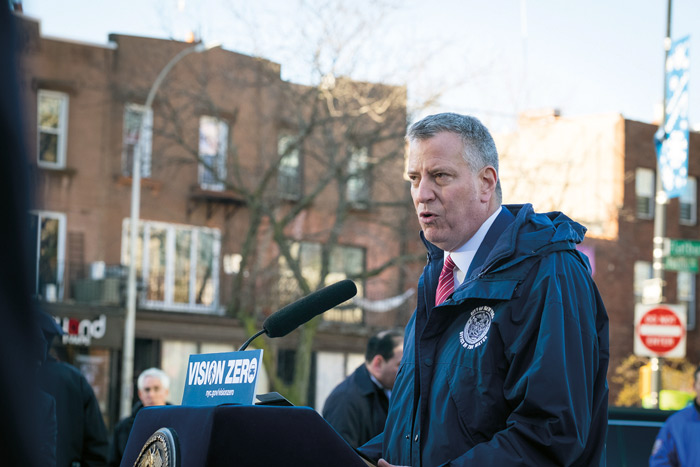 “Fall and winter continue to be the most dangerous times of year for pedestrians and cyclists, but darker days don’t have to be darker times on our streets,” Mayor de Blasio said.

The de Blasio administration recently launched the City’s fourth annual Dusk and Darkness campaign with a citywide “Day of Awareness” to draw attention to the increased risks to pedestrians and cyclists during the fall and winter.

Part of the Vision Zero initiative, Dusk and Darkness includes the following elements:

Increased Evening/Nighttime Enforcement: As it has the last three years, NYPD last week began focusing enforcement resources on the most hazardous violations (speeding and failure-to-yield to pedestrians), with precincts increasing their on-street presence around sunset hours when data show serious pedestrian crashes increase. NYPD will also focus resources on drunk-driving efforts, as the incidents of DWI have historically increased during evening and nighttime hours in the fall and winter.

Daylight Saving Awareness:  DOT statistics from 2010-2014 show that serious collisions increase by approximately 40 percent in darker early evenings. This year, Daylight Savings Time will end at 2:00 a.m. on Sunday, November 3, when clocks “fall back.” As with previous years, DOT will run radio ads during the evening commute, alerting drivers to the dangers of lower visibility and encouraging them to follow the 25 MPH citywide speed limit and to yield to pedestrians and cyclists. Ads are running through December 15 on fourteen stations.

Dusk and Darkness 4.0: At last Tuesday’s event, officials cited the encouraging fatality statistics from Dusk and Darkness campaigns over the previous two years. In the five years before the campaign began, the City averaged 63.4 traffic fatalities in the period between Nov. 1 and March 15—many of them in the evening hours. In the first year of Dusk and Darkness, the overall fatality number declined to 51 from 67; in the second year, fatalities declined further to 44.

However, during the past year, pedestrian fatalities during the same period rose to 59. More than 20 percent of this year’s cyclist fatalities have occurred after sundown.

“Fall and winter continue to be the most dangerous times of year for pedestrians and cyclists, but darker days don’t have to be darker times on our streets,” Mayor Bill de Blasio said. “For the past few years, we’ve seen that the Dusk and Darkness campaign works, and bringing back a proven, effective tool will help us step up our Vison Zero initiative and ensure that New York City streets become even safer.”