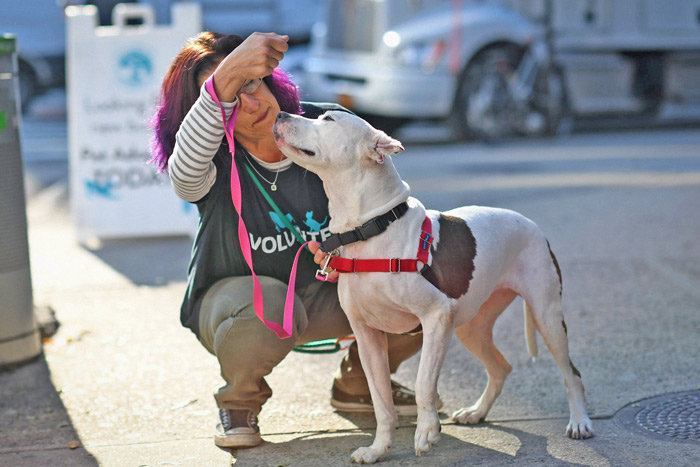 Our loyal readers should know by now that, here at The Forum, we’re dog lovers.

Cocoa the chocolate Labrador retriever and Cane Corso, Massimo, are on the payroll.

So this Thanksgiving we wanted to express our gratitude to the City Council for passing a package of animal rights legislation that Mayor Bill de Blasio on Monday signed into City law.

Through Introduction 1478-A, the administration will establish an Office of Animal Welfare, headed by a director appointed by the mayor. The office will advise and assist the mayor in interagency coordination and cooperation related to animal welfare administration, regulation, management, and programs.

“Today is one small step for man and one giant leap for our four-legged friends. Indeed, it has been said that the moral progress of a society can be judged by how its animals are treated,” said Councilman Justin Brannan (D-Brooklyn). “That is why, in a truly humane city, animals cannot be an afterthought. By establishing this office—the first of its kind in the nation—New York will lead the way as a city that not only cares about, but prioritizes animal welfare.”

The package of measures also includes Intro. 870-A, which requires animal shelters operated by the City to post photographs of adoptable animals within three days. Intro. 1202-A prohibits the trafficking of wild birds, including pigeons. Intro. 1378-A prohibits restaurants and stores from selling foie-gras. Intro. 1425-A prohibits carriage horses from being worked in certain heat conditions. Through Intro. 1498-A the City Police Department will now be required to report data regarding animal cruelty complaints on its website on a semi-annual basis, including the number of complaint reports alleging an act of animal cruelty and the number of animal cruelty arrests by precinct. Intro. 1570-A requires that dogs entering kennels are in compliance with the City Health Code and are vaccinated for kennel cough.

“Bordatella bacteria is one of the most common causes of  “kennel cough” in dogs and cats and can pose serious, if not deadly, complications for our favorite pets,” said Councilman Mark Levine (D-Manhattan). “This disease is highly contagious and often poses a justification for euthanasia in dogs and cats that contract it. This bill will ensure that when dogs and cats use kennels, grooming businesses, or other pet-oriented establishments they will not be in danger of contracting or transmitting this very contagious disease. This bill will go a long to protect our furry friends from unnecessary harm when we the ability to so easily immunize them from this common and deadly sickness.”

“Animal abuse is part of the cycle of violence. Intentional animal cruelty has been shown to correlate with other crimes, including violence against people,” added Councilman Fernando Cabrera (D-Bronx). “We know that women who enter domestic violence shelters often report that their partners hurt or killed the family pet. Today we’re taking important steps to end the cycle of violence. Ending animal cruelty ends violence to animals and humans.”

Thank you all for your efforts to protect our most precious resource of pure love and devotion.