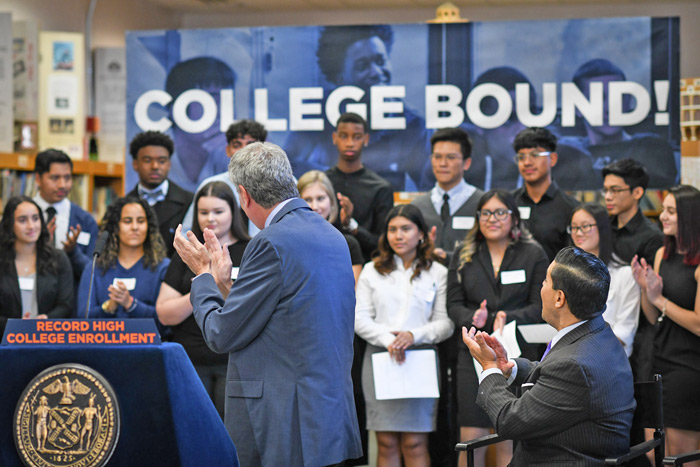 “We are making sure our students know college isn’t just for a select few and that ZIP code no longer determines who gets to go,” Mayor de Blasio said.

A record-high 48,782 students in the Class of 2018 enrolled in college, up approximately 3,600 students compared to the 2017, Mayor Bill de Blasio and Schools Chancellor Richard Carranza announced Thursday.

De Blasio and Carranza pointed to the Equity and Excellence for All agenda the key to the record-high numbers. The mayor introduced the initiative in September 2015, with its targeted goal being to support progress across all schools so that, by 2026, 80 percent of students graduate high school on time, two-thirds of graduates are college-ready, and all students are reading in 2nd grade. The agenda includes the College Access for All, AP for All, Algebra for All, and Single Shepherd initiatives.

According to City education officials, through College Access for All, more students are completing key milestones and directly applying to college: They are visiting a college campus with their high school, taking the SAT, applying to college, applying for financial aid, and enrolling in college and postsecondary programs. The initiative has also removed financial obstacles for students. In the Class of 2018, 44,944 students redeemed fee waivers through CUNY, allowing them to apply for free. That same school year, 80 percent of juniors participated in SAT school day, taking the exam in school free of charge.

“Our schools launch our kids to successful futures, and now more students than ever are enrolled in college and taking another step toward fulfilling their potential,” de Blasio said. “We are making sure our students know college isn’t just for a select few and that ZIP code no longer determines who gets to go.”

“NYC students and their families work so hard and overcome so many obstacles to achieve success. Our job in government is to provide them with adequate funding and effective school governance to let them succeed,” said Deputy Assembly Speaker Cathy Nolan. “Congratulations to all principals, teachers, Chancellor Carranza and Mayor de Blasio on their efforts. More to come as we continue to focus on equity and excellence.”

City Councilwoman Adrienne Adams (D-Jamaica) added that the gaudy numbers announced Thursday directly reflect “the hard work and effort being made by the Department of Education’s administrators, teachers, and service personnel that keep improving our education system.”