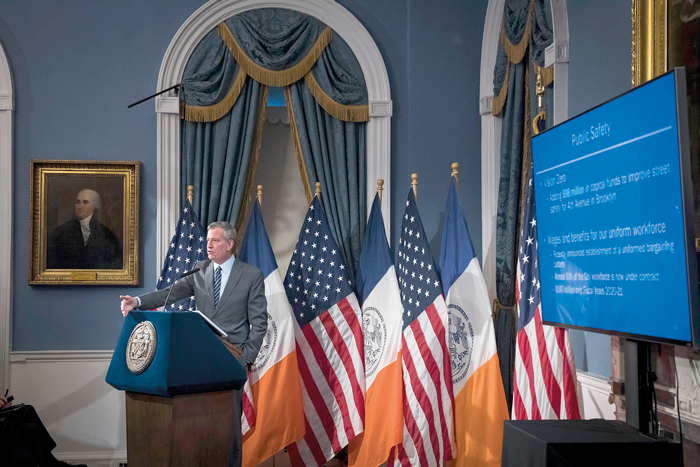 “In planning for the next year, we are facing an unprecedented $6 billion State budget gap. Medicaid cuts could reverse years of progress at NYC Health + Hospitals and impact health care for the most vulnerable,” Mayor de Blasio said.

Coming in at a cool $95.3 billion—nearly $3 billion more than the 2020 version—Mayor Bill de Blasio had some explaining to do Thursday as he outlined the City’s Preliminary Budget for Fiscal Year 2021.

According to the administration, the FY 2021 budget as crafted in light of the State’s $6 billion budget gap, of which $4 billion is a Medicaid deficit. This is the largest State deficit that has occurred during the de Blasio administration, Hizzoner pointed out—and could mean significant cuts to the City budget, he added.

NYC Health + Hospitals would bear the brunt of the cuts, de Blasio noted. The hospital system, which serves more than one million New Yorkers annually, has achieved ambitious goals through the administration’s transformation plan, Hizzoner boasted. This includes closing over $1 billion of its budget gap, meeting planned revenue and expense goals, and improving collection and billing practices. According to de Blasio, now, more patients have primary care doctors, expanded access to expert medical care, and their appointment wait times have been reduced. Cuts to the H + H budget would jeopardize H+H financial recovery—and access to health care for many New Yorkers, de Blasio added.

The City will fight cuts and work with the State on changes to their Medicaid system that will provide savings, the mayor vowed.

Additionally, the mayor blasted the Metropolitan Transportation Authority for continuing “to demand more out of New York City taxpayers— $3 billion to the MTA capital plan and $100 million more annually for Access-a-Ride, without addressing root causes of the problem.”

Critical investments in the FY 2021 Preliminary Budget include:

Provides wages and benefits to our uniformed workforce based on the recently established uniformed bargaining pattern, for a total investment of $147 million in FY20 and 21.

In partnership with the City Council, renews commitment to help low-income New Yorkers with their transportation needs by investing $106 million in the FY21 Fair Fares program.

Continues the mission of Vision Zero by investing $98 million in capital funds to improve street safety for pedestrians and cyclists on 4th Avenue in Brooklyn.

Supplements a larger U.S. Army Corps of Engineers beach and bayside resiliency project with an additional $33 million in capital across FY20 and FY21 to reconstruct beach crossings with durable, sustainable materials and remove hazardous wooden jetties.

“In planning for the next year, we are facing an unprecedented $6 billion State budget gap. Medicaid cuts could reverse years of progress at NYC Health + Hospitals and impact health care for the most vulnerable,” de Blasio added. “We will work with our partners in Albany to continue to find savings while fighting to protect health care for all New Yorkers.”