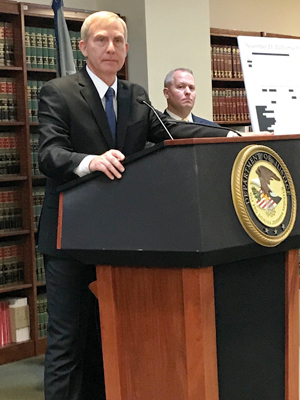 Photo Courtesy of U.S. Attorney’s Office for the Eastern District of New York

“We are using all available tools and resources to stop foreign call center scammers from conning elderly and vulnerable victims in New York and throughout the United States,” said Brooklyn U.S. Attorney Richard Donoghue.

According to DOJ officials, the complaints allege that the companies were warned numerous times that they were carrying fraudulent robocalls—including government- and business-imposter calls—but they continued to facilitate their delivery. The calls, most of which originated in India, led to substantial financial losses suffered by elderly and vulnerable victims in the United States.

“We are using all available tools and resources to stop foreign call center scammers—and for the first time their U.S.-based enablers—from conning elderly and vulnerable victims in New York and throughout the United States,” said Brooklyn U.S. Attorney Richard Donoghue.

Federal prosecutors noted that the two cases announced Tuesday contain similar allegations. The defendants in one case are Ecommerce National, LLC d/b/a TollFreeDeals.com, SIP Retail d/b/a sipretail.com, and their owner/operators Nicholas Palumbo and Natasha Palumbo of Scottsdale, Ariz. The defendants in the other case include Global Voicecom, Inc., Global Telecommunication Services Inc., KAT Telecom, Inc., aka IP Dish, and their principal Jon Kahen, of Great Neck, N.Y. In each case, DOJ has sought an order immediately halting the defendants’ transmission of allegedly unlawful robocall traffic. A federal court has entered a temporary restraining order against the Global Voicecom defendants.

In the cases announced Tuesday, the U.S. alleges that the defendants operate voice over internet protocol (VoIP) carriers, which use a broadband internet connection rather than traditional phone lines to carry telephone calls. Numerous foreign-based call centers and VoIP carriers are alleged to have used the defendants’ VoIP carrier services to pass fraudulent robocalls to victims in the United States. The complaints specifically allege the defendants served as “gateway carriers,” making them the entry point for foreign-initiated calls into the U.S. telecommunications system and that the defendants carried many millions of robocalls. For example, the complaint against the owners/operators of Ecommerce National d/b/a TollFreeDeals.com alleges that the defendants carried 720 million calls during a sample 23-day period, and that more than 425 million of those calls lasted less than one second because the calls did not connect or the recipients immediately hung up, indicating that they were robocalls. The complaint further alleges that many of the 720 million calls were fraudulent and used “spoofed,” or faked, caller ID numbers. The calls facilitated by the defendants falsely threatened victims with a variety of “catastrophic government actions,” including termination of Social Security benefits, imminent arrest for alleged tax fraud, and deportation for supposed failure to fill out immigration forms correctly.

“Anyone who engages in deceptive practices like imposter fraud should know, regardless of where they are, they will not go undetected and will be held accountable,” said U.S. Postal Service Chief Inspector Gary Barksdale.