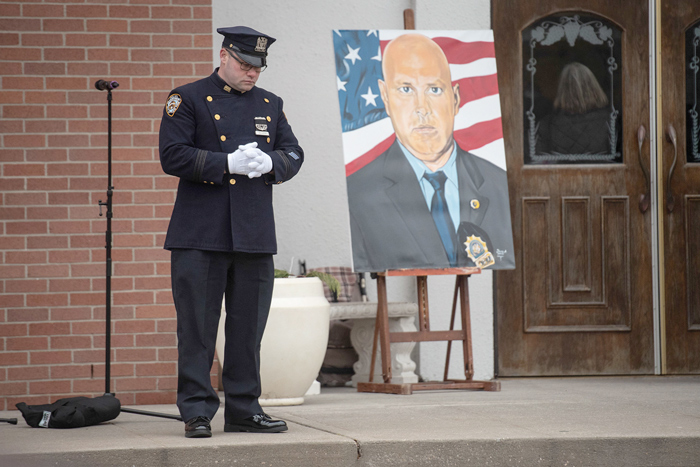 An NYPD officer reflects next to a portrait of Det. Brian Simonsen during his funeral procession on Feb. 20, 2019.

The Richmond Hill community and members of the 102nd Precinct on Wednesday celebrated the life and sacrifice of Det. Brian Simonsen, who was shot and killed on Feb. 12, 2019, by friendly fire in the line of duty.

“I’m surviving, that’s how I put it,” Simonsen’s widow, Leanne, said Tuesday during an interview on “Good Day New York” on Fox 5.

According to court documents, on that Tuesday, the two men indicted in Simonsen’s death—Christopher Ransom and Jagger Freeman—arrived together at the T-Mobile store on 120th Street and Atlantic Avenue in Richmond Hill. Shortly after 6 p.m., Freeman walked past the store, peered through the windows, and then communicated via cell phone with Ransom. Moments later, Ransom—wearing a dark hoodie slung over his head with a mask covering part of his face—entered the store. While Freeman was allegedly posted outside as a lookout, Ransom is alleged to have brandished a black pistol and ordered the two employees inside the store to remove the cash from the registers and remove the iPhones and cash from the back room safes. Shortly thereafter, according to charging documents, Ransom allegedly exited the back room and re-entered the main store area—still holding what appeared to be a gun—as members of the NYPD entered the location.
According to the charges, after Ransom spotted the cops retreat from the store, he allegedly exited with the phony weapon in-hand and pointed it at police officers, who immediately began to discharge their weapons.
Simonsen, 42, was fatally shot once in the torso.