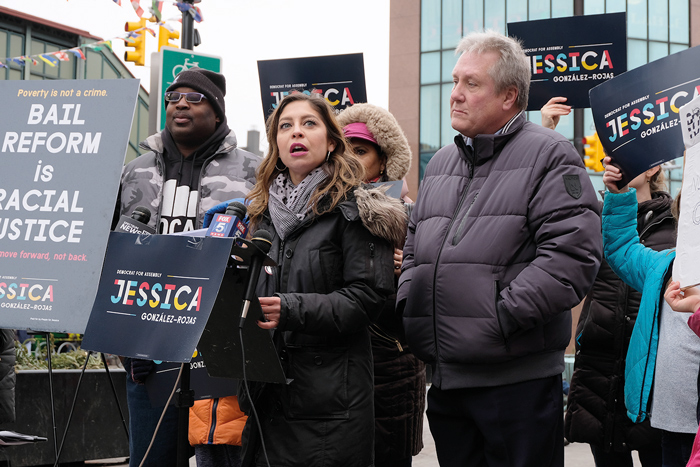 The controversial new bail-reform law, which constrains judges from instituting bail or remanding defendants who have committed certain offenses, surely has plenty vocal detractors and no shortage of tabloid front pages with high-font headlines screaming about the latest example of a career criminal flouting said law to his or her advantage.

Gonzalez-Rojas and Dromm said the city’s “criminal justice system is under attack from [those] who want to return to an unjust past,” and roundly blasted attempts by “reactionary politicians and conservative prosecutors” to roll back advancements on bail reform in New York.

“People like Harvey Weinstein, who is out on bail, are allowed to wander while people who have a $250 bail for a minor infraction, were not allowed, until this law came into effect, to get out. So these are the injustices that we’re talking about when we’re talking about fighting for bail reform,” Dromm said. “I am also very concerned about the right-wing forces that are speaking out against the existing law. This is about justice. It is important that we keep the bail reform law as it is now and that there are no changes to the law.”

According to Gonzalez-Rojas, a nationally-recognized expert on health care reform, gender and racial justice, pre-trial detention in the Big Apple needlessly puts too many people at risk. Marginalized populations—black and brown people, immigrants, and LGBTQ+ communities—are most often those that cannot afford bail and are disproportionately criminalized due to poverty, she said Tuesday.

“Bail reform is a vitally necessary reform that impacts so many communities of color and low-income people. Pre-trial detention needlessly puts too many people at risk,” she added. “Marginalized populations that cannot afford bail are disproportionately criminalized due to poverty. We stand united against the fear mongering and with our state leaders to maintain the important criminal justice reforms.”