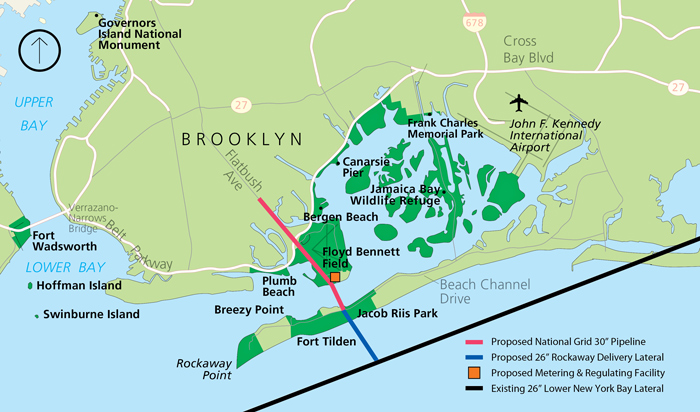 The red and blue show how the natural gas pipeline would have extended through the Rockaways and into Brooklyn.

In an 18-page letter to the Transcontinental Gas Pipe Line Company, LLC, DEC Division of Environmental Permits Director Daniel Whitehead outlined the agency’s decision. According to Whitehead, the DEC has determined construction of the NESE pipeline project would not meet New York State’s rigorous water quality standards. Construction of the proposed project would result in significant water quality impacts resulting from the re-suspension of sediments and other contaminants, including mercury and copper, and would disturb sensitive habitats, including shellfish beds and other bottom-dwelling marine life, clearly demonstrating that a default mixing zone is not appropriate for this project. New York is not prepared to sacrifice the State’s water quality for a project that is not only environmentally harmful but also unnecessary to meet New York’s energy needs.

“I believe the State’s denial of the Williams Pipeline is consistent with its previous concerns regarding the project and is a great victory for our environment,” said State Sen. Joe Addabbo, Jr. (D-Howard Beach).“I have joined many opponents of the pipeline, such as my constituents in Rockaway, in highlighting the unwarranted need for this costly Northeast Supply Enhancement since it was announced. Now, the New York State Department of Environmental Conservation has denied the project because it would not meet our State’s water quality standards. I would like to thank all of the advocates and volunteers who came together to protect our environment from a project that would be obsolete in the near future, as we are innovating new ways of providing clean energy for the New York.”

City Comptroller Scott Stringer called Friday’s decision “a major victory in our work to deliver the greener and more sustainable future our children and our children’s children deserve.”

“I am so proud to have stood alongside a dedicated coalition of climate champions who stood up against this pipeline and demanded an end to the fossil fuel industrial complex,” he added. “Today we celebrate, but tomorrow we get back to fighting for the urgent action that our climate crisis demands. We need to put an end to the unchecked expansion of fracked gas infrastructure that will lock in emissions for years to come, whether it is billions of dollars in investments in our natural gas network, the expansion of liquified natural gas facilities, or doubling down on pipeline infrastructure. We need to build on this momentum and ensure New York City keeps leading the world to a greener future for all.”

According to the DEC, the agency conducted a comprehensive review of the NESE application and supporting materials, as well as the more than 16,000 public comments received on the application, before reaching its decision.