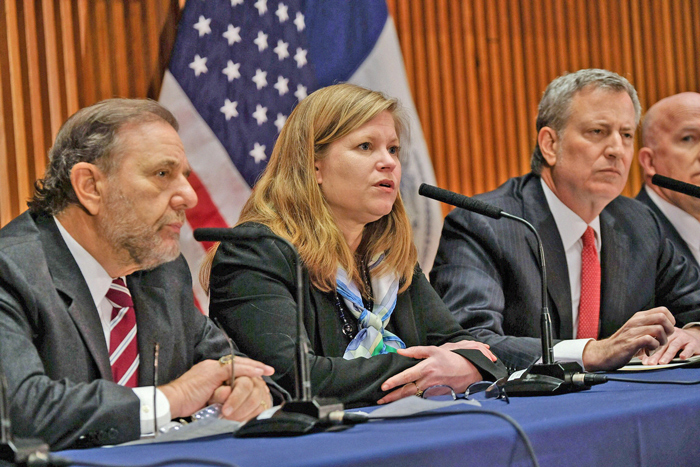 “We have accomplished a lot in the last two months, but for me, good enough is not good enough,” Sanitation Commissioner and Food Czar Kathryn Garcia said.

Beginning this week, the City Emergency Food Delivery program will be delivering more than a million meals per day for residents affected by the pandemic crisis, Mayor Bill de Blasio said Thursday.

According to Hizzoner, the City is currently working with approximately 30 food providers, and is actively hiring and expanding non-profit and for-profit providers to increase capacity, variety and cultural-competence.

While this is emergency food, City officials said they also ensure that the meals meet nutrition requirements. For the senior meals program, for example, meals have sodium limits and required servings of protein, fruits and vegetables, and whole grains. Due to scale, some vendors are providing shelf-stable boxes, while others are providing fresh food or frozen food as well.

And if food quality does not meet the program’s standards, de Blasio said the City addresses it directly with the providers, and has ended contracts with some that were not living up to their commitment.

“What we set out to do was feed everyone; enormous mission, feed them quality food, feed them safely, make sure everyone was safe in the process, the folks who prepare the food, the folks who deliver the food, the folks who are receiving the food. And it’s a huge endeavor, and every day we’re trying to make it better, but what has happened in just the last few weeks, this was all put together in a matter of weeks is quite remarkable and something New Yorkers should be proud of as another example of the spirit, the energy, the entrepreneurship, the creativity that exists in this amazing place,” de Blasio said. “Since the middle of March when this crisis went into higher gear, the City of New York has distributed 32 million meals to New Yorkers who needed food. So, it’s a vast, vast scale and we’re trying to get it right every day, and we’re trying to improve it every day.”

City Sanitation Commissioner and Food Czar Kathryn Garcia said the Emergency Food Delivery program is “really nothing like anything that’s been done in this city or I would say probably across the world.”

“We have accomplished a lot in the last two months, but for me, good enough is not good enough,” Garcia added. “We want to continue to strive to make our program better, and we want to hold ourselves, and our food providers to the highest expectations. We want to make sure that every meal is healthy, and meets and exceeds the minimum requirements for protein, for vegetables, for grains, doesn’t contain too many calories, or too much sodium, that it’s arriving on time, and is delivered directly to your door. If you order kosher, halal, vegetarian, or other specialized food, you should get it. That’s what you need to eat. We don’t want anything to go to waste, and if we can’t deliver a food that you will eat, then we have not solved the problem.”