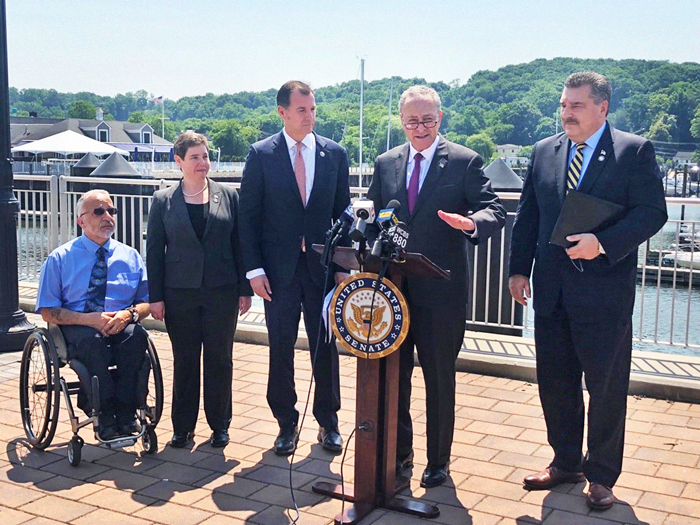 “With all forms of bigotry on the rise, it has never been more important to make sure that New Yorkers gathering in houses of worship, dropping their kids off at school, and visiting their local JCC or any other faith-based community center are protected from any harm,” Sen. Schumer said.

The funding is administered by the U.S. Department of Homeland Security’s Federal Emergency Management Agency. The UASI program provides funding to address the unique needs of high-threat, high-density urban areas by helping to prevent, protect against, mitigate, respond to, and recover from acts of terrorism. Schumer and Gillibrand also announced a nation-highest $73,968,000 in State Homeland Security Program funding for all of New York, which will help state government implement anti-terrorism strategies outside of the five boroughs.

According to Schumer, FEMA will deliver $12,690,198 in vital grants to 138 high-risk nonprofit organizations in the New York City area through their Nonprofit Security Grant Program, which helps religious schools, Jewish community centers, synagogues, churches, and other places of worship enhance their security. This is the largest NSGP–UA allocation in the nation and the highest number of applications funded in the New York City area in program history. According to Schumer and Gillibrand, this follows a push by both senators earlier this year to increase program funding and to get FEMA and DHS to hold webinars on the Nonprofit Security Grant Program to help NYC nonprofits apply for funding. This effort culminated in a February workshop co-hosted by Schumer and Gillibrand’s offices, where senior representatives from FEMA, NYS DHSES, and CISA provided guidance on applying for NSGP grants.

“In recent months, we have seen countless acts of terror, bigotry, and hate across the nation. As one of the most populated states in the country, New York has been the target of persistent domestic terrorism and a growing spate of anti-Semitic violence,” Gillibrand said. “This critical funding will ensure that nonprofit organizations, schools, and places of worship are protected and have the resources needed to enhance their security and help prevent attacks. No one should ever have to live in fear and I promise to continue fighting for the funding our state, cities, and communities need to make sure every New Yorker is safe.”

Schumer added, “We began this year resolved to act after a series of reprehensible anti-Semitic attacks in and around New York City. With all forms of bigotry on the rise, it has never been more important to make sure that New Yorkers gathering in houses of worship, dropping their kids off at school, and visiting their local JCC or any other faith-based community center are protected from any harm. Federal security programs like UASI, SHSP, and NSGP form the cornerstone of effective preparedness against terror threats and hate crimes. That’s why I’m so proud that New York is receiving the lion’s share of these resources, which will go a long way towards protecting all New Yorkers. But our work is far from over: We must continue to confront head-on the poisonous prejudice and ignorance that motivates these attacks. Only then can we overcome them.”