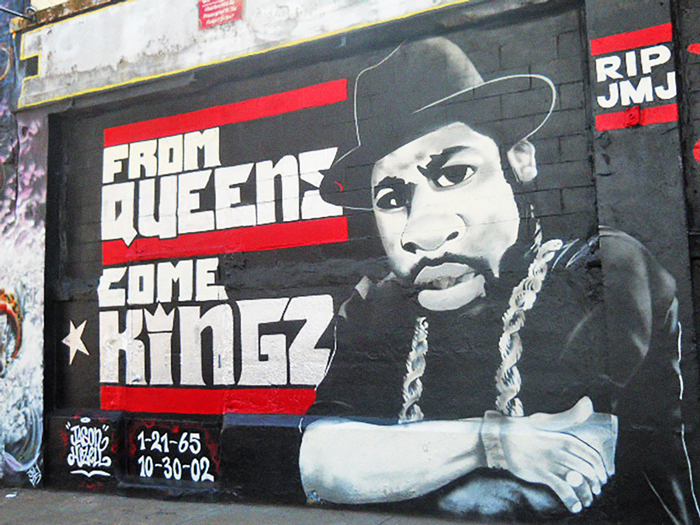 After nearly 18 years, it seems justice has begun to take the painfully slow steps toward finally being served.

A 10-count indictment was unsealed Monday in Brooklyn charging Ronald Washington and Karl Jordan, Jr., with the Oct. 30, 2002 murder of Jason Mizell, also known as “Jam Master Jay,” a member of the famed hip-hop group Run-DMC.

Each defendant is charged with murder while engaged in narcotics trafficking and firearm-related murder for the fatal shooting of Mizell inside the victim’s recording studio in Jamaica. Jordan is charged with several additional narcotics distribution counts.

Jordan was arrested Sunday and arraigned Monday afternoon. He pleaded not guilty and was ordered held pending trial. Washington is in federal custody and will be arraigned at a later date.

As alleged in court filings, on Oct. 30, 2002, Mizell was present at his recording studio, 24/7 Studio, located on Merrick Boulevard in Jamaica. At approximately 7:30 p.m., Washington and Jordan, armed with firearms, entered the studio. Washington pointed his firearm at an individual located inside the studio and demanded that the person lie on the floor. Jordan approached Mizell, pointed his firearm at him, and fired two shots at close range, striking the victim once in the head, killing him. The second shot struck another individual in the leg.

The investigation revealed that the motive for the killing resulted from Mizell’s previous acquisition of approximately 10 kilograms of cocaine from a narcotics supplier in the Midwest. The cocaine was allegedly intended to be distributed in Maryland by Washington, Jordan and other co-conspirators. Mizell had recently informed Washington that the defendant would not be involved in distributing the narcotics in Maryland, which precipitated the murder conspiracy.

Photo Courtesy of Google
Mizell was murdered inside his recording studio on the second floor of this Merrick Boulevard building in Jamaica.

In addition to the murder, Jordan is also charged with one count of conspiracy to distribute cocaine and seven counts of cocaine distribution.

“The gunshots that rang out in a recording studio in Queens nearly 18 years ago, taking this pioneering rap artist’s life, have been answered. Today’s indictment shows that no amount of time passed can erase the commitment of our NYPD detectives, federal law enforcement partners and prosecutors in the US Attorney’s Office for the Eastern District, to the pursuit of justice,” said NYPD Commissioner Dermot Shea.

If convicted, Washington and Jordan face a minimum of 20 years’ imprisonment and a maximum term of life imprisonment, or the death penalty.

“The defendants allegedly carried out the cold-blooded murder of Jason Mizell, a brazen act that has finally caught up with them thanks to the dedicated detectives, agents and prosecutors who never gave up on this case,” said Acting Brooklyn U.S. Attorney Seth DuCharme. “The charges announced today begin to provide a measure of justice to the family and friends of the victim, and make clear that the rule of law will be upheld, whether that takes days, months or decades.”

NYPD Cold Case Squad, we were determined to bring justice for the Mizell family and see these killers held accountable. For nearly 18 years, one of these alleged perpetrators walked freely, thinking he’d gotten away with murder. But today, thanks to the unwavering efforts of the investigators and prosecutors, two individuals will answer for their crimes.”

Forum Editor-in-Chief Michael V. Cusenza wrote the following in January 2009 as an appreciation of Jason Mizell and his contributions to the revolutionary hip-hop culture. It first appeared in the New York Daily News:

It is quite difficult to fathom that this month marks the seventh January since the icon known to the music world as Jam Master Jay was icily snuffed out in a recording studio on Merrick Boulevard in Jamaica.

It’s yet another somber twenty-first day of the year; a day when family, friends and grateful fans commemorate a pioneer and his craft, and wonder if the assassin who pumped a .45-caliber bullet into Jay’s head will ever see justice.

As the backbone of seminal trio Run-DMC, Jay revolutionized the role of the hip hop DJ.

He took a somewhat static position and turned it into a dynamic force of music. Jay was at once composer, choreographer, producer and band leader. Perhaps what resonated most with me was Jay’s reverence for the medium.

He approached the turntable in the spirit of a musical instrument; his deft cuts on countless records were the perfect compliment to the unexampled rhyme styles of DJ Run and DMC.

They were records that changed everything.

Or the day my cousin handed me the landmark “Peter Piper/My Adidas” 12-inch still wrapped in cellophane with the Nobody Beats the Wiz price tag affixed.

I first played “Peter Piper” on a home stereo turntable and quickly became obsessed with Jay’s manipulation of Bob James’“Take Me to the Mardi Gras.”

It was new and exciting. The compositions took a backseat to memorizing the most fleeting of cuts. The goal was to emulate Jay, to the extent that I lost sight of the gift he provided.

Sadly, it took a hit man’s bullet on Oct. 30, 2002, to remind so many of us of the gift we had in Jay—a rare musician who consistently gave his talent and time to the culture.

On days such as this, we cling to memories and the belief that he lives on through the music. We hold on tightly to the image of a beaming DJ dressed in all black, with a fedora crown and pristine shell-toes.

We find comfort in his smile and irrepressible energy. And even if it’s for a brief moment, we cease dwelling on the void and celebrate the presence.