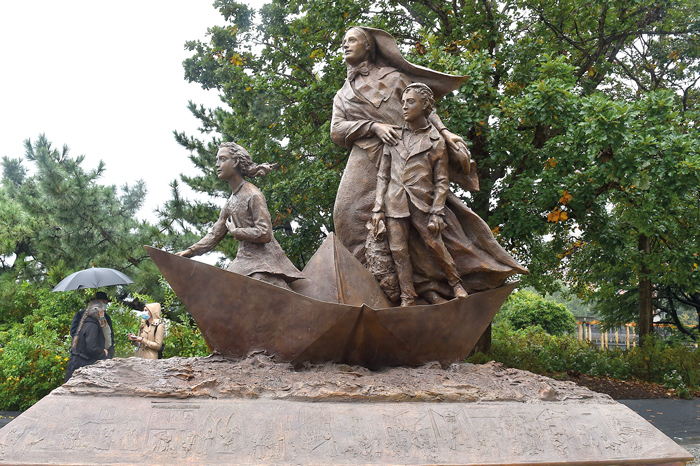 Governor Andrew Cuomo on Monday—Columbus Day—vigorously applauded after unveiling the State’s Mother Cabrini Memorial located in Battery Park City, just south of South Cove along the Battery Park City Esplanade. With a direct view of both the Statue of Liberty and Ellis Island, this area provides a fitting location to pay tribute to the patroness of immigrants.

The memorial was unveiled one year after the Governor first announced plans for its creation on Columbus Day of last year. The memorial includes interpretive panels highlighting Mother Cabrini’s service to Italian-American immigrants and the poor in New York including building dozens of orphanages, hospitals, and schools. The plaza is surrounded by seating and a mosaic created from stones from Mother Cabrini’s birthplace of Sant’Angelo Lodigiano, Italy. 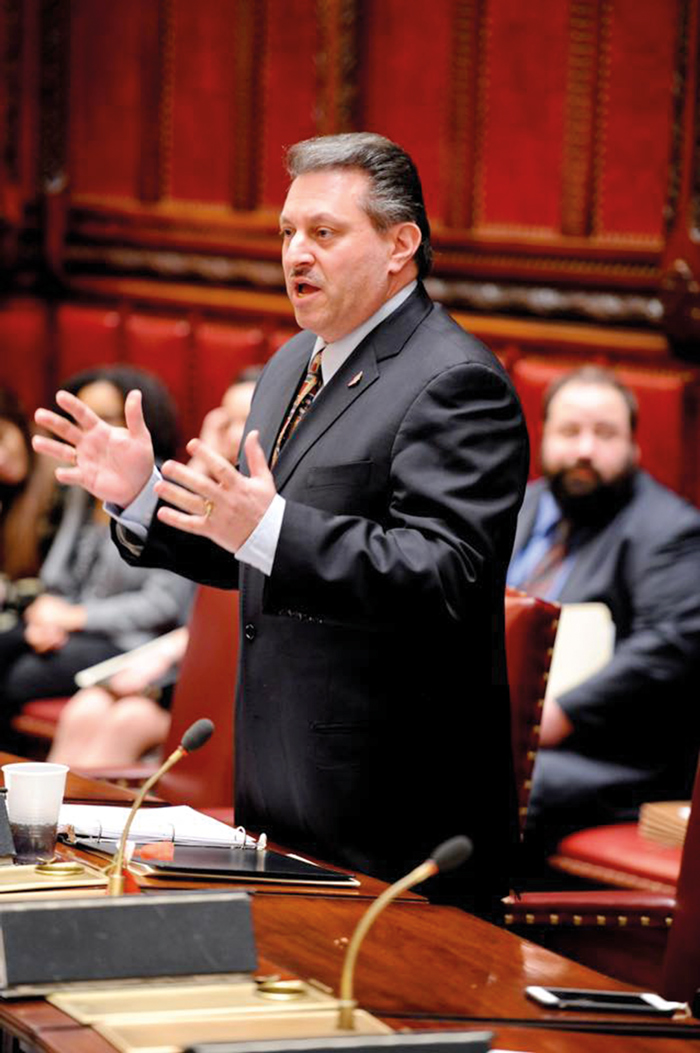 “I believe that on a day in which we acknowledge the positive contributions of Italians, it is only fitting to honor Mother Frances Xavier Cabrini with a statue within the five boroughs,” Sen. Addabbo said on Monday, Columbus Day.`

New York-based sculptors Jill and Giancarlo Biagi designed and built the memorial to Mother Cabrini. According to the administration, Jill Biagi studied at the University of Washington and she received a fellowship to work and study art in Pietrasanta, Italy with stone carving artisans. Giancarlo Biagi studied at the Istituto d’Arte Stagio Stagi of Pietrasanta before moving to the United States to attend the Art Students League of New York. Together, Jill and Giancarlo have created sculptures for several public commissions with the goal of capturing the life story and preserving the legacy of revered individuals. Additional works by these artists are found in major museums around the world. Jill and Giancarlo maintain studios in New York and Pietrasanta.

According to the administration, the bronze memorial which sits on a marble base depicts Mother Cabrini on a paper boat with two children, a representation of the paper boats which, as a child, Mother Cabrini would fold and fill with violets. Placing them in the currents outside of her home, these boats would send her “missionaries” around the world. The paper boat serves as a symbol of hope and courage: Although fragile and delicate, it can hold against the water’s currents and stay afloat—symbolizing Mother Cabrini’s determination in the face of adversity and struggle, Cuomo noted.

The three figures are all facing the Statue of Liberty, a beacon of hope for immigrants as they entered New York Harbor to begin their new lives in America, and where Mother Cabrini arrived on a mission to help Italian migrants in 1889. The young girl, a reflection of Mother Cabrini’s youth, is holding a book, a symbol of Mother Cabrini’s commitment to educating children. As music has been important to the heritage of immigrants, the young boy is holding luggage and an ocarina, an instrument invented near Mother Cabrini’s birthplace, representing the music and culture immigrants have brought to America.

“This Columbus Day, the celebration of Mother Cabrini is even more appropriate than when we announced it last year because of the difficulties that we are facing. We all know that these are challenging times, but we also know that in the book of life, it is not what one does when the sun is shining that tests our metal—it’s what one does in the fury of the storm, and that’s where we are today,” Cuomo beamed. “In this complex world, may this statue serve to remind us of the principles that made us great as a country and as a people and the principles that keep us special on this globe—the values of Mother Cabrini: compassion, acceptance, community, freedom, faith, hope and love.”

State Sen. Joe Addabbo, Jr. (D-Howard Beach), who has pushed for a Cabrini memorial in the city, added, “As president of the Italian-American Legislators Conference, I believe that on a day in which we acknowledge the positive contributions of Italians, it is only fitting to honor Mother Frances Xavier Cabrini with a statue within the five boroughs. As the first U.S. citizen to be canonized as a saint, Mother Cabrini is rightfully recognized for all her New York efforts towards immigration, children, orphanages and hospitals.”

On Oct. 24, 2019, Cuomo established the Mother Cabrini Memorial Commission to oversee the creation of a statue honoring Mother Cabrini. Consisting of 19 members appointed by the governor, the commission was charged with providing recommendations to the governor pertaining to the design, location and installation of the new memorial. Mother Cabrini Commission member Philip Foglia, long-time prosecutor and counsel to Italian American Legal Defense and Higher Education Fund, sadly passed away due to COVID-19 in April.

The commission opened the competition for proposals on Dec. 13, 2019, and solicited designs through robust outreach to the artistic community. The commission received submissions from artists from around the world, each movingly telling the story of her life and her many contributions to immigrants in New York and worldwide.

Cuomo noted that Mother Frances Xavier Cabrini was an Italian-American who founded many organizations to help the needy. She was the youngest of 13 children, born in Lombardy in 1850, and before migrating to the United States, she took vows and founded the Missionary Sisters of the Sacred Heart, an order that served and schooled orphans.

While in New York, she taught at St. Joachim’s parish, the Church of Our Lady of Pompeii, and the Transfiguration Catholic Church—all in Manhattan—as well as St. Rita of Cascia in The Bronx and the Church of St. Stephen in Brooklyn. She also founded the Columbus Hospital, which was eventually renamed the Cabrini Medical Center and was housed in Manhattan for many years.

Mother Cabrini was originally buried in West Park and is now interred at the St. Frances Cabrini Shrine in Manhattan, which she founded. In 1946, nearly 30 years after her death, Mother Cabrini became the first naturalized U.S. citizen to be canonized. She is recognized as the patron saint of immigrants. Several academic institutions, religious buildings and hospitals across New York are named in her honor.