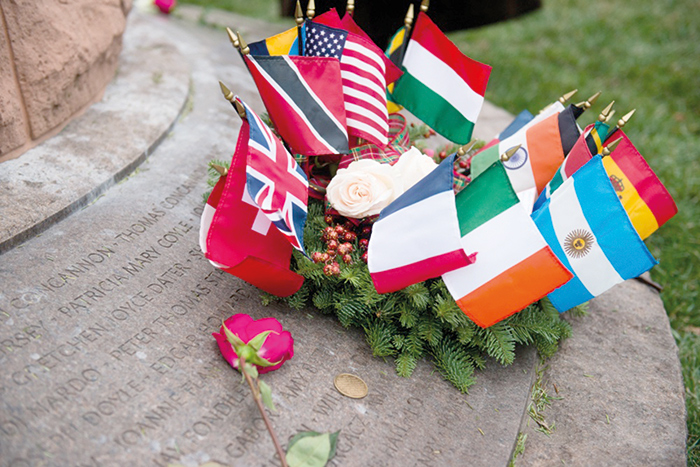 At Arlington National Cemetery in Virginia, a memorial cairn constructed of 270 stones—one for each of the victims of Pan Am Flight 103 who came from 21 different countries—is the sight of an annual service on the anniversary of the disaster, Dec. 21.

Thirty-two years to the day after the terrorist bombing of a Pan Am jet over Scotland killed 270 people, including 190 Americans and 11 residents in the town of Lockerbie, federal investigators on Dec. 21 announced charges against a Libyan man they say was involved in making the bomb.

The investigation has been open for more than three decades, even after a Libyan intelligence officer was convicted in 2001 on 270 counts of murder in the case in a Scottish court. The FBI, working closely with authorities in Scotland, has continued to pursue leads over the years pointing to others that may have been involved in the attack.

In a press conference last week in Washington, D.C., federal officials announced the criminal complaint against Abu Agela Mas’ud Kheir Al-Marimi for his alleged role in the attack. He is currently in prison in Libya.

The charges are the result of hundreds of interviews and leads that took investigators to 16 countries to pore over decades-old evidence, according to FBI officials. The investigation has relied heavily on foreign partners, many in Scotland, where remnants of the plane fell, creating an 845-square-mile crime scene.

Attorney General William Barr said during the Monday press conference that while the bombing occurred more than three decades ago, it left a lasting impression on anyone old enough to remember it.

“For those of us who do remember, that tragic event and the iconic images of its aftermath, some of which are displayed here today, are forever seared in our memories,” Barr said.

In 1991, the British and American governments charged Abdel Basset Ali al-Megrahi and Lamen Khalifa Fhimah in the case. Their trial in 2000 was held in Scottish court built for the occasion on a former U.S. military base in the Netherlands. The court acquitted Fhimah and convicted al-Megrahi in 2001, sentencing him to life in prison. He was released in 2009 when he was believed near death from cancer, but he survived almost three more years.

The charges unsealed this week are the first in the case since 1991. Over more than three decades, victims’ families have continued to push to advance the investigation, believing the plot and its execution were not limited to Fhimah and al-Megrahi. Agents in the Washington Field Office, which has been leading the FBI investigation since the outset, have made repeated trips to countries with a nexus to the plot. And in private briefings, FBI officials have steadfastly assured victims’ families the investigation remains robust and ongoing. Every year, for example, FBI and Scottish investigators meet with Victims of Pan Am Flight 103, Inc. to brief any developments. The meeting is held during Remembrance Week every fall at Syracuse University, which lost 35 study-abroad students in the bombing. They were flying home for the holiday break.

“The men and women of the FBI have worked tenaciously for 32 years to investigate this horrific terrorist attack,” said Steven D’Antuono, assistant director in charge of the FBI’s Washington Field Office.