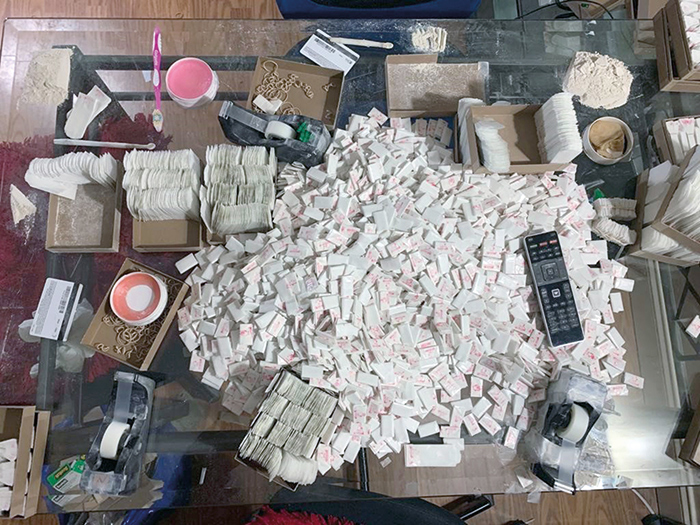 Photo Courtesy of Office of the Special Narcotics Prosecutor

DEA estimates the street value of the narcotics at $12 million.

An accused major trafficker and three other individuals are charged in connection with a large-scale heroin-packaging mill dismantled in Ridgewood, Queens. Approximately 39 kilograms of suspected heroin, with an estimated street value of $12 million, 1,000 fentanyl pills and $200,000 cash were recovered during the investigation, conducted by the Office of the Special Narcotics Prosecutor, DEA’s New York Drug Enforcement Task Force, Group T-21, and Homeland Security Investigations (HSI) New York.

On Monday, February 8, 2021 at approximately 4 p.m., members of NYDETF Group T-21 and SNP’s Investigators Unit were conducting surveillance as part of the short-term investigation when they observed MARTINEZ, a suspected narcotics trafficker, exiting 63-16 Forest Avenue carrying a backpack. Agents and officers stopped MARTINEZ as he walked down the block and found that the bag allegedly contained approximately $200,000 cash. MARTINEZ was also carrying four cell phones and keys to 63-16 Forest Ave.

A short time later, Members of T-21 entered the residential building located at 63-16 Forest Ave. and knocked on the door of Apartment 2A. In response to the knocking, MEDINA opened the apartment door. Inside the living room, agents and officers saw an empty heat-wrapped bag of a type used for wrapping a kilogram of narcotics. Noises were coming from behind a closed door. Upon opening the door, agents and officers discovered two women, SOSA DE ESPINAL and BERROA, hiding inside a bathroom with the lights off.

A search of the apartment revealed that one of its two bedrooms was set up for packaging heroin. Inside the bedroom, agents and officers found 31 pressed, brick shaped packages wrapped in duct tape, each allegedly containing a kilogram of heroin, and an additional six kilograms of loose powder inside plastic containers and zip-lock style bags. A tabletop held approximately 100,000 individual dose glassine envelopes filled with heroin, as well as empty envelopes and stamps. Glassine envelopes bore various brand names, including “Red Scorpion,” “The Hulk,” “Universal,” “Hard Target,” “Last Dragon, “Dope” and “Venom.” All of the equipment necessary for processing and packaging heroin was also present in the bedroom, including digital scales, sifters and grinders.

Agents and officers also seized approximately 1,000 blue pills bearing markings similar to pharmaceutically produced oxycodone, but suspected to be counterfeits containing fentanyl. More than 26 cellphones and mail addressed to MARTINEZ were also recovered from the apartment. The results of DEA Laboratory analysis on the narcotics in this case are pending.