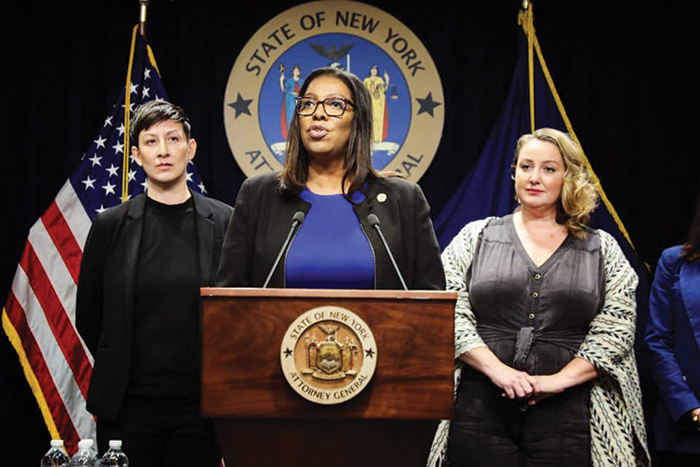 Fabien Levy, press secretary and senior advisor to State Attorney General Tish James, released on Friday the following statement after Gov. Andrew Cuomo’s team attacked the credibility of the 11 women who came forward with allegations of sexual harassment against the governor, as well as the independence and credibility of the independent investigators:

“After multiple women made accusations that Governor Cuomo sexually harassed them, the governor, himself, requested that Attorney General James oversee an independent investigation. The independent investigators selected are widely respected professionals, recognized for their legal and investigatory ability. To attack this investigation and attempt to undermine and politicize this process takes away from the bravery displayed by these women.

“There will be a rolling production of interview transcripts made available to the state Assembly, which will be redacted as needed.

“There are 11 women whose accounts have been corroborated by a mountain of evidence. Any suggestion that attempts to undermine the credibility of these women or this investigation is unfortunate.”

In a letter to James, Cuomo’s lawyers ripped the AG’s Office’s special investigators for what the attorneys characterized as their investigation’s “lack of neutrality and impartiality.”

“At today’s press conference, you reported that you conducted 178 witness interviews,” Cuomo lawyers Paul Fishman, MitraHormozi, and Dipanwita Deb Amar wrote in their missive. “In situations like this, where there were so many interviews in such a compressed time, and by different members of the investigative team, there were bound to be errors and inconsistencies in the transcripts as well as in the report that quotes and paraphrases the testimony. As a result, we remain concerned that the report contains additional inaccuracies and fails to present the evidence in a balanced and fair manner. And it is also problematic that witnesses and their counsel still do not have access to their own transcripts and you still apparently have no plans to provide them.”

The three counselors used the letter’s conclusion to further lambast James and her Office’s handling of the investigation.

“Draping yourselves in the cloak of independence, you pursued a process that was designed to make you the only ones with any visibility into the evidence. But merely calling an investigation independent is not an excuse or an opportunity to prevent those who are being investigated from having a truly meaningful way to contest unadjudicated findings and conclusions. The witnesses, the subjects of the investigation, and the public deserve more.”

Cuomo outside counsel Rita Glavin has been on a media tour defending her embattled client also by blasting the State AG.

“The governor deserves to be treated fairly, and he must be. That did not happen here. This was one-sided and he was ambushed,” Glavin said on Friday. “There’s a rule of law in this country. I believe in it. Give us the opportunity to have the evidence and we’re going to give our response. Thank you.”