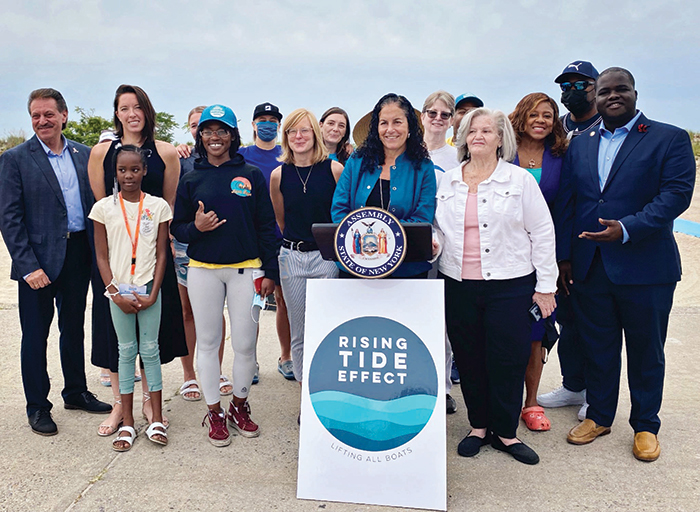 “We will save lives with this legislation,” Assemblywoman Pheffer Amato said.

Assemblywoman Stacey Pheffer Amato (D-Howard Beach) on Tuesday announced that her legislation creating the first ever Commission to Prevent Childhood Drownings in New York State was recently signed into law by Gov. Kathy Hochul. The landmark bill was inspired by a wave of drownings in the Rockaway Peninsula, and was supported by a broad coalition of elected officials, community organizations, and swim safety advocates, Pheffer Amato noted. The goal of the commission is to create and launch new tactics and methods to reduce childhood drownings in New York through obtaining data and holding hearings. Senator Tim Kennedy (D-Buffalo) sponsored the bill in the State Senate.

“We will save lives with this legislation,” Pheffer Amato said. “We’ve sent a signal that the State of New York cares about preventing unnecessary loss of life, and that water safety is not a privilege, but a necessity. This historic Commission will use their knowledge to come up with new ways of expanding water safety in our state to protect our children. I want to thank the many swim safety advocates who fought so hard for this bill to pass, Senator Tim Kennedy for his steadfast commitment to passing this bill in the State Senate, and Governor Hochul for signing this impactful bill into law.”

Pheffer Amato represents the entire Rockaway Beach, Howard Beach neighborhoods, and many other coastal communities in the 23rd Assembly District. This legislation will create a nine-person task force with appointees from the governor’s office, and both houses of the legislature. The task force will be responsible for a report six months after their first meeting.

“Childhood drowning causes hundreds of deaths every year across our nation, along with non-fatal injuries such as severe brain damage,” Kennedy said. “Many of these deaths and injuries can be prevented with proper education, with one study showing that formal swimming lessons reduced the likelihood of childhood drowning by a massive 88 percent. In Western New York, we are blessed with two Great Lakes and numerous rivers, creeks, and streams that provide endless recreational opportunities, but also present risks. With the creation of the Commission to Prevent Childhood Drowning, we are setting New York State on a path to save lives. Thank you to Assemblymember Pheffer Amato for her leadership in the Assembly, and to Governor Hochul for recognizing the importance of this legislation and signing it into law.”

“The Water Safety Coalition, a group of concerned residents, community groups, non-profit organizations, and local Rockaway businesses, is thrilled to hear that the Governor has signed this bill into law,” said Nikita Scott of the Rockaway Water Safety Commission. “We thank Assemblywoman Pheffer Amato and the other elected officials involved for their leadership in this effort. Along with the thousands of New Yorkers who have signed petitions, educated themselves and taken action to make their community a safer place. Our coalition looks forward to supporting the implementation of the bill and continuing to work together to make water safety education an essential right for all, to save lives and create a more inclusive recreation community.”