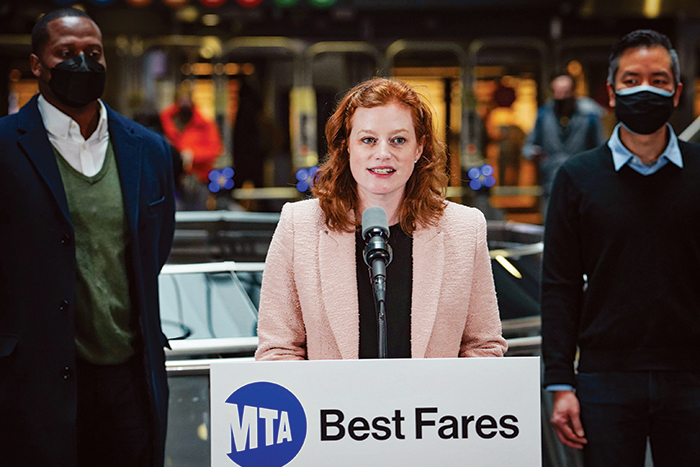 “Fare capping will save many of our riders money and give them more flexibility,” said MTA Chief Customer Officer Meyer.

To encourage New Yorkers to get back on subways, buses, and trains, and to reduce the cost and worry surrounding everyday travel, the Metropolitan Transportation Authority has announced a pilot fare program that is more affordable, more flexible and more fair.

The temporary promotional changes to fare structures will begin Feb. 28 for New York City Transit and Feb. 25 for commuter rail tickets. The pilot will last for at least four months.

Customers who tap and go with OMNY will be charged the standard $2.75 pay-per-ride fare for their first 12 trips starting every Monday. Any trips after that through the following Sunday would be free.

Free transfers between subways and buses will continue to be offered to all customers under this pilot. Two-part trips that are linked by a free transfer between subway and bus are considered one trip toward the 12 needed to reach the free-fare threshold each week.

This is a $2.75 or 35-percent discount from the LIRR’s current weekday fare between eastern Queens and Manhattan or Brooklyn, which is $7.75. (CityTicket must be purchased and activated before boarding the train. The LIRR’s off-peak fare between eastern Queens and Manhattan or Brooklyn remains $14 when purchased on board the train.) City Ticket is valid at these LIRR stations: Atlantic Terminal, Auburndale, Bayside, Douglaston, East New York, Flushing-Main Street, Forest Hills, Hollis, Jamaica, Kew Gardens, Laurelton, Little Neck, Locust Manor, Mets-Willets Point, Murray Hill, Nostrand Avenue, Penn Station, Queens Village, Rosedale, St. Albans and Woodside.

All LIRR and Metro-North fares will remain off peak through Feb. 28, 2022.

“Fare capping will save many of our riders money and give them more flexibility,” said MTA Chief Customer Officer Sarah Meyer.