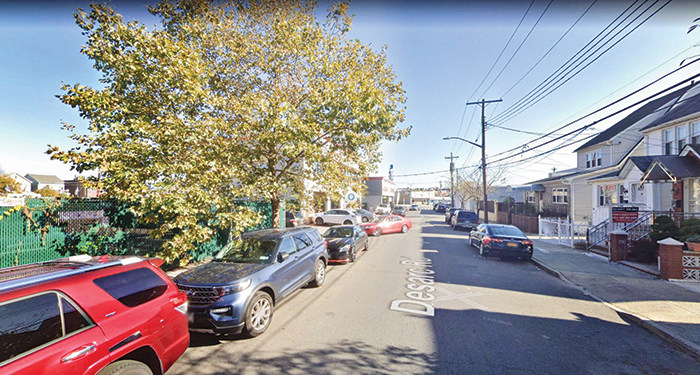 A man was killed and two others injured after a wild early Sunday morning shootout outside a nefarious Ozone Park catering hall.

Brownsville, Brooklyn resident Francis Raymond, 38, was slain during the bullet-riddled melee outside Liquid Event Hall on Desarc Road near Cross Bay Boulevard that also put two other men in area hospitals with gunshot wounds. One of those men, Dwayne Whyte, 28, has been charged with attempted murder, attempted assault, and gun possession for firing shots during the intense encounter. Whyte, according to published reports, was shot four times in the legs. He’s still recovering in Jamaica Hospital Medical Center. The man who fired the weapon that killed Raymond is still on the loose. At least one weapon was discovered at the scene.

An Ozone Park resident who lives near the catering hall said the establishment has been a problem for some time.

“Sooner or later, really something needs to happen,” Kaled Alamarie, 51, told the NY Daily News. “I’m hoping this is an inflection point, that they will shut this place down.”

According to City Police Department statistics, shootings are up in the 106th Precinct. So far in 2022 there have been nine reported shooting incidents in the South Queens command, compared to six at the same time last year. The 106 serves Ozone Park, South Ozone Park, Lindenwood, and Howard Beach.

In the neighboring 102nd Precinct, there have been six shooting incidents in 2022. There were six shootings in the 102 at the same time in 2021. The command is comprised of Kew Gardens, Richmond Hill, Woodhaven, and the northern part of Ozone Park.