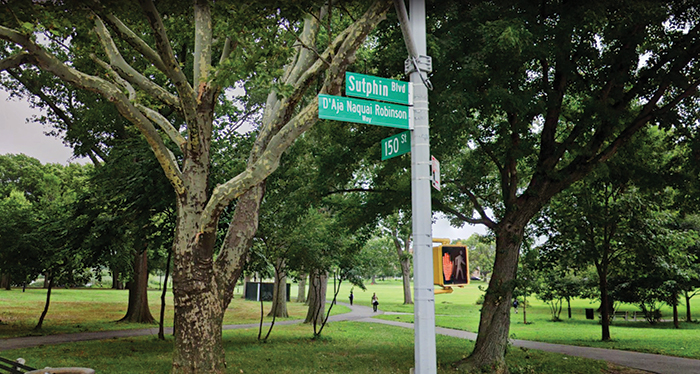 The corner of Sutphin Boulevard and 150th Street is now named for D’Aja Robinson.

Queens District Attorney Melinda Katz on Thursday filed motions with defense attorneys to vacate a wrongful conviction due to new evidence coming to light in the case.

In People v. Capers, the physical evidence indicated one gun was fired and eyewitness testimony singles out Kevin McClinton as the lone shooter. McClinton, who is solely culpable for the crime, is currently serving 25 years to life in prison. The prosecution’s only eyewitness at Capers’s trial recanted his identification of Capers as the shooter. The recantation is corroborated by contemporaneous recorded phone calls in which the eyewitness admits he lied.

D’Aja Robinson, a 14-year-old honor student at the Campus Magnet School, was killed May 18,

2013, when 10 .40-caliber pistol rounds were fired into a crowded city bus in a gang-related dispute. An innocent bystander, Robinson was on the bus heading home from a friend’s birthday party. Her senseless murder devastated her close-knit family and touched the community deeply. The corner of Sutphin Boulevard and 150th Street is now named for her.

Gang member Kevin McClinton was arrested for Robinson’s murder after an eyewitness, Terrence

Payne, told police and prosecutors that he witnessed McClinton fire “all 10 shots” into the bus.

A year later, Capers was arrested based on a new eyewitness account, from a second gang member,

at Capers’s trial that he saw Capers fire first into the bus and that McClinton then took the gun from Capers and continued firing.

Capers was convicted largely based on Jappa’s eyewitness account and was sentenced to a prison term of 15 years to life.

The Queens District Attorney’s Conviction Integrity Unit (CIU) reinvestigated the case, prompted by information from counsel at Debovoise and Plimpton citing, among other evidence, a recantation made by Jappa to a defense investigator. Over the course of a year, the CIU interviewed dozens of witnesses, including Jappa, who again recanted his testimony implicating Capers.

While such recantations are rightly viewed with skepticism, Jappa’s claim that he testified falsely is corroborated by recorded phone calls uncovered during CIU’s investigation. Specifically, recorded phone conversations Jappa had from jail in 2014 with his mother, whom he repeatedly told that the information he was providing to police and prosecutors about Capers was false. There is no evidence that anyone other than Jappa and his mother were aware of what was said until recordings of the calls were reviewed eight years later.

Capers, who was 15 years old at the time of the shooting, was released Thursday after being incarcerated for more than eight years on the murder charge. The indictment will be dismissed.

McClinton will continue serving a sentence of 25-years-to-life in prison for Robinson’s murder.

“My thoughts today are with D’aja Robinson’s family,” Katz said. “This motion might not be easy for them to accept, but they can take comfort in knowing that the solely culpable individual, Kevin McClinton, will be spending a very long time in jail, perhaps the rest of his life.”