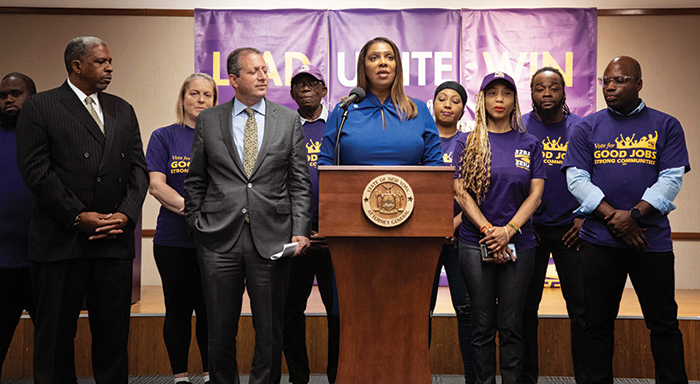 “Over and over again, we have seen the dangers and pitfalls of cryptocurrencies and the wild swings in these funds,” AG James said. “Hardworking Americans should not have to worry about their retirement savings being wiped out due to risky bets on unstable assets like cryptocurrencies.”

Individual retirement accounts (IRAs) and defined contribution retirement plans, like 401(k) plans and 457 plans for government employees, are key retirement investments for millions of Americans. Recently, a major financial institution has offered Bitcoin as an investment option in its 401(k) plans, and other financial institutions are expected to follow suit. With recent crypto market crashes and other market turbulence, Attorney General James stressed the need to protect workers’ retirement funds and avoid the dangers of risky cryptocurrencies.

Two congressional bills have been proposed to allow crypto investments in retirement plans and prevent regulators from restricting access to these investments in such plans. The Retirement Savings Modernization Act would put 401(k) retirement savings at risk by exposing them to the volatility and illegality of cryptocurrencies. In her letter, Attorney General James explains that recent high-profile failures of crypto companies make digital assets unsuitable retirement investments. Just this month, the value of many cryptocurrencies fell precipitously after one of the largest crypto exchanges in the world, FTX Trading Ltd., collapsed. In May 2022, many cryptocurrencies reached significant lows following the crash of a so-called stable coin, TerraUSD. The failure of TerraUSD spread and resulted in $500 billion in losses into the broader crypto market.

Aside from such failures, James cautioned that cryptocurrency prices swing wildly because they are purely speculative rather than an investment in future cash flow. Bitcoin, for example, the first and most popular of cryptocurrencies, peaked at $68,789.63 on Nov. 12, 2021, and traded as low as $15,599.05 just yesterday. Yet no underlying fundamentals explain why it traded at over $64,000 one year and under $20,000 the next. Many once well-established cryptocurrency businesses have frozen customer withdrawals, announced mass layoffs, or filed for bankruptcy, while investors have been left in financial ruin.

In addition, James warned that cryptocurrencies are often an instrument for fraud and crime. For example, the Federal Trade Commission (FTC) recently reported that since the start of 2021, more than 46,000 people have reported losing over $1 billion total in crypto to scams. The FTC further noted that there is no institution to flag suspicious transactions and attempt to stop fraud before it happens and that crypto transfers cannot be reversed. Most issuers of cryptocurrencies are not examined by any regulator, state or federal. Safeguards like those provided by the Federal Deposit Insurance Corporation (FDIC) or the Securities Investor Protection Corporation (SIPC) are unavailable to protect investors from the failures of digital asset companies.

Congress historically has enacted laws to help American workers save for retirement. In her letter, James described legislation that Congress could adopt to protect workers’ retirement savings from crypto losses, including making minor amendments to existing statutory restrictions on how retirement savings may be invested.