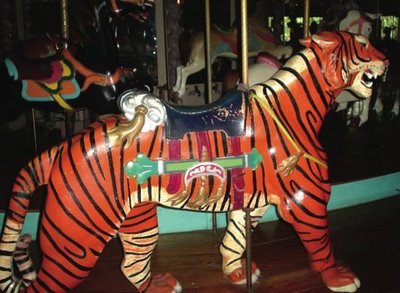 The carousel in Forest Park will remain shuttered this summer if the city does not find a vendor to run the historic ride, which has operated for the past two decades.

The current contract with New York One, LLC, which has operated the Forest Park Carousel for the past five years, expires on May 26, according to the Parks Department, which did not receive any proposals for a new contract when bids were due in February.

“If we do not receive any bids, the carousel will be closed until we find a new concessionaire,” a department spokeswoman wrote in an e-mail to The Forum. In hopes of attracting a new vendor, Parks put out a second request for proposals on March 16, which is due back on April 20.

According to the city, the Forest Park Carousel contains some of the last surviving creations of master woodcarver Daniel Carl Muller. It was first operated in 1903 in Darcut, Massachusetts before it was taken apart and stored for future use.

A different carousel entertained park goers until it burned down on December 11, 1966. In 1972, when searching for a new carousel, vendor Restaurant Associates found the 1903 carousel designed by Muller in the possession of an architect in Connecticut. After a full restoration, the carousel operated until 1985, when it fell into disrepair and was all but forgotten for three years. It received another meticulous renovation in 1988 and began operating again the following summer.

New York One, LLC also operates the carousels in Central Park and Flushing Meadows Corona Park. The Forest Park Carousel includes 49 horses, a lion, a tiger, a deer and two chariots arranged in three concentric circles. It also contains an original carousel band organ, according to the Parks Department. It is located just inside the park on a small hill near the intersection of Woodhaven Boulevard and Myrtle Avenue.