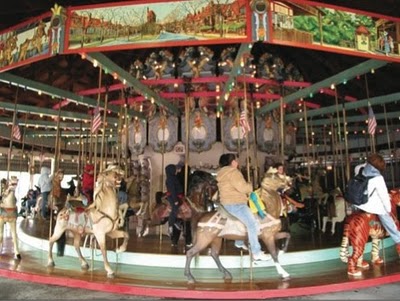 Despite the many amenities and recreational opportunities offered throughout Forest Park’s 500 acres, there is still one item visitors can’t enjoy—the historic Forest Park Carousel.

The carousel has remained closed since last summer, when the city failed to find a vendor to operate it after the contract with New York One LLC expired last May.

Parks Department spokeswoman Trish Bertuccio said Tuesday that the department is currently in negotiations with a company to have the carousel reopen but could not say whether it would open before the end of the summer.

The Woodhaven Residents Block Association (WRBA) has started a petition to gain more support from the community in an effort to have the carousel reopened.

“Our first step is to get it reopen and then the second get it landmarked,” said Edward Wendell, president of the WRBA, who called the carousel a work of art. “It’s not only wonderful for the children, but it’s also a selling point for homeowners. We’d hate to lose that.”

According to the Parks Department, the carousel dates back to the 1890s and is the only designed and produced carousel left and by master carver Daniel C. Muller. The carousel can be found near the intersection of Woodhaven Boulevard and Myrtle Avenue. After it was restored, it began operating in 1966 until 1985, and then received another renovation in 1988.

Supporters have taken to Facebook to raise additional support through the group “Save the Forest Park Carousel.” More than 500 members have shared memories and suggested ideas on how funds can be raised to help the carousel reopen.

Councilman Eric Ulrich (R-Ozone Park) has also shown support for the effort, arguing in a letter to Parks that the carousel needs to be preserved and restored to its “original magnificence.” Ulrich asserts that many of his constituents consider the carousel to be the “heart and soul of the Woodhaven community” that should be preserved so that “future generations may share in this one-of-a-kind experience.”

“This is the 100th year of the carousel and it should be a celebration—but it’s not,” Wendell said.