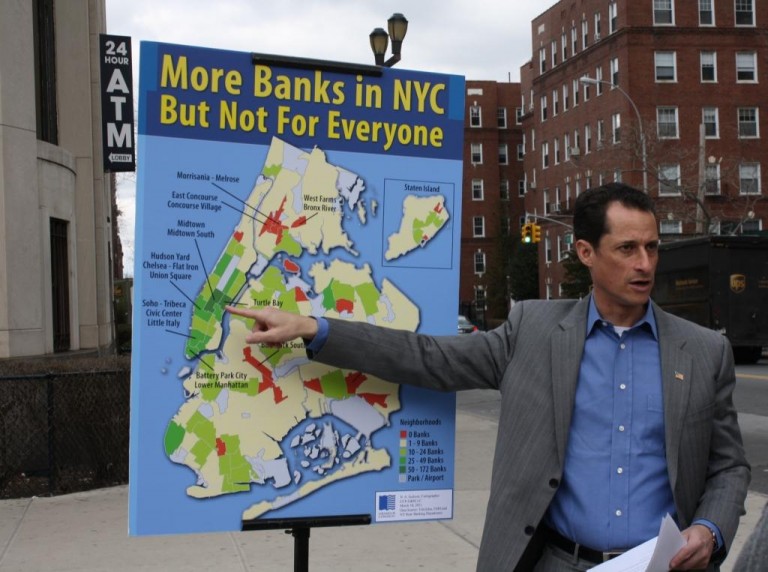 Congressman Anthony Weiner points out Soho in Manhattan has gained plenty of banks, but many areas in Queens are still left out in a press conference held outside Ridgewood Savings Bank in Forest Hills

A new study conducted by Congressman Anthony Weiner (D-Kew Gardens) shows the number of banks in the city is rising—a good sign of economic recovery. But many areas, including parts of Queens, are not reaping the benefits.

“Individual businesses like to go to community banks to get community loans,” Weiner said. “You’re more likely to go and get good results at a neighborhood bank as opposed to going to a bank in Manhattan. It makes it difficult to expand the workforce and expand jobs.”

To make matters worse, banks are avoiding lower income neighborhoods where their services and economic development are most needed, Weiner said.

Flushing has gained five banks over the last 4 years, bringing its total to 39, but South Jamaica gained one bank—the only bank in the area. Some areas, including Woodhaven, Woodside, Astoria and Elmhurst have lost banks in the last four years. The study shows that as median household income rises, so do the number of banks.

Weiner described this process as “the wealthy getting wealthier” as banks follow the money. To remedy the situation, Weiner has proposed revising the Community Reinvestment Act (RCA) so that low-income services receive more weight. He also said the CRA should begin penalizing banks with low ratings by denying expansion and merger requests, and giving banks incentives for offering no fee services to low-income earners.

Without the banks, workers are forced to use “second tier money management places—check cashing places—which have a place in our economy, but can’t substitute for real, full-service banks,” Weiner said.