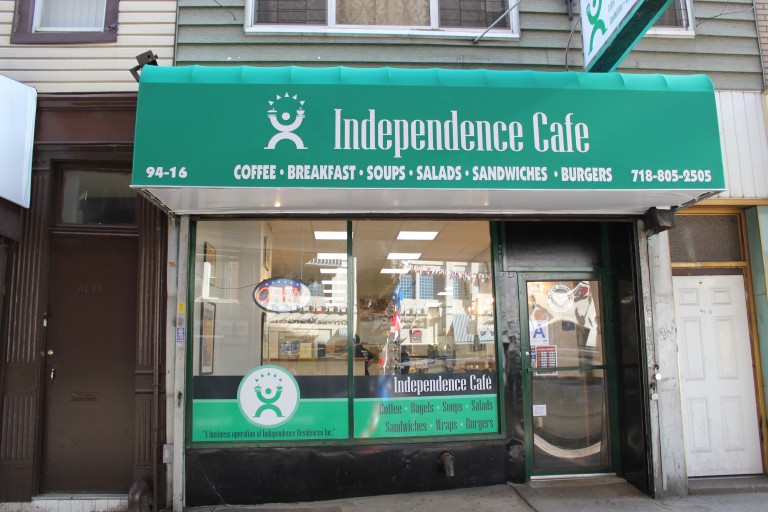 In the time it took to order and eat a burger—which was delicious—at newly opened Independence Café, four different customers raved about the food. With freshly prepared food made each day by chef Jim Klapak, the new establishment on Jamaica Avenue is set to become a staple for Woodhaven’s breakfast and lunch needs.

But this isn’t a restaurant review.

With decreased funding from the state, the café will help augment some of the funds the agency has lost.

Independence Residences has two housing facilities near the café in Woodhaven and operates 15 houses throughout Queens, Brooklyn and the Bronx. They also have day services and crisis prevention and intervention counseling centers throughout the city.

Through Independence Residences’ programs, “a lot of our folks were gaining a lot of work experience,” said Executive Director Raymond DeNatale. And after receiving funds from the state Office For People With Developmental Disabilities to start enhanced supportive employment programs, the idea for the café was born.

Enhanced supportive employment teaches skills on the job that can then be applied elsewhere, rather than teaching skills before looking for suitable work environments.

“It’s very much within their skill set. It’s more about giving them the opportunity to succeed,” Michael DeNatale said.

Klapak said the work environment was different than any other, but “most of the time, it’s a lot of fun and fulfilling.”

Michael started working with Independence Residences in 2001 for some extra money, and eventually, as he worked with the company’s buildings and grounds crew before doing more hands-on work with consumers, it became a career.

Opening the café has been hard—Michael said he’s been working 80-hour weeks—but the job has been very gratifying and the support he’s received from the community has been wonderful.

“Business goes up every week. We’re starting to see some regular customers from businesses along Jamaica Avenue,” Michael said.

The café looks to differentiate themselves from other delis by offering a wide variety of specials and preparing only fresh food.

“It makes a difference when we put the extra effort into the food,” Klapak said.

Unfortunately for Michael, he rarely gets the chance to taste it. “When you start a business like this, it’s amazing how little time you have to eat,” he said.