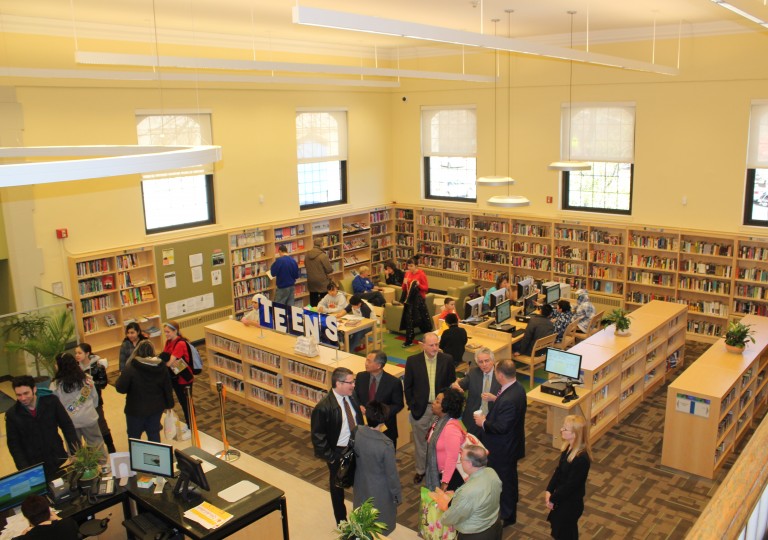 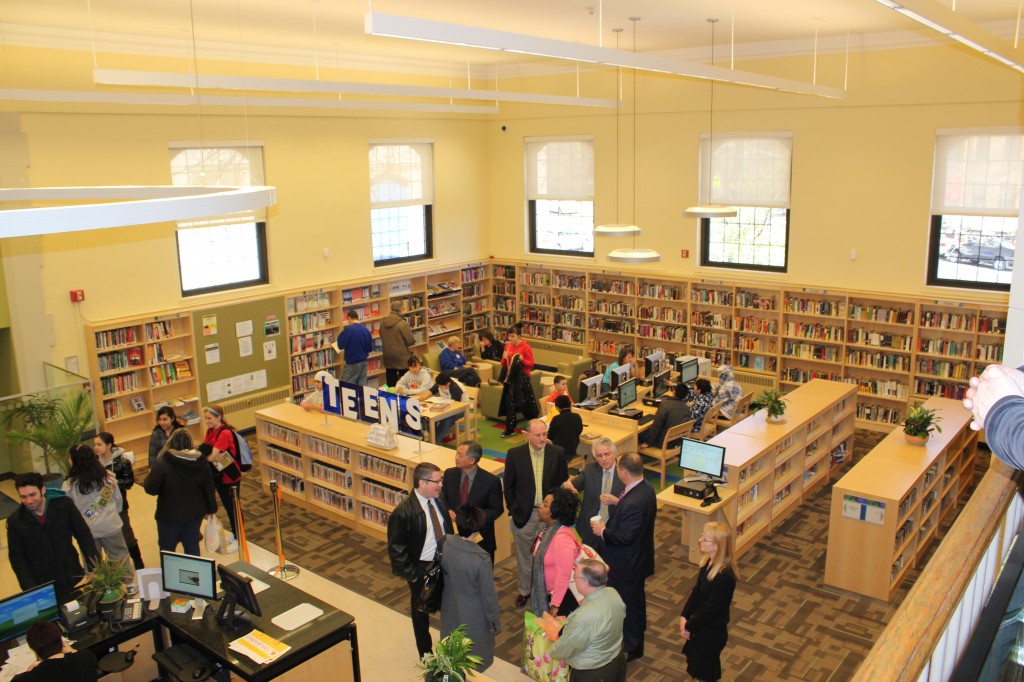 An overhead view of the new teen library, which stocks study materials, popular books and computers for work and play. The Ridgewood library was completely renovated for $3.6 million.

Ridgewood Library has come along since 1999 when its second floor was shuttered and its basement used for storage. With a push from the Friends of Ridgewood Library and local officials, the storage room became a new children’s library in 2006, and last Saturday a ribbon cutting ceremony was held for the library’s complete renovation.

“It took several years but we did it, and I couldn’t be more pleased with the result,” said Queens Library CEO Thomas Galante.

Ridgewood Library now has updated technology that simplifies checking out books, along with a 24-hour self-service kiosk for returns. The main lobby was completely renovated and includes a new teen library, which has popular books and study materials for Regents exams. The mezzanine level, which was shuttered before, is a relaxed reading area.

Including the renovation of the children’s library in 2006, the cost totaled $3.4 million.

“It’s so much better. They did a really nice job,” said Edward Lettau, a Ridgewood resident for 45 years. He said he hadn’t visited the library in years and was amazed at the new technology and feel of the building. 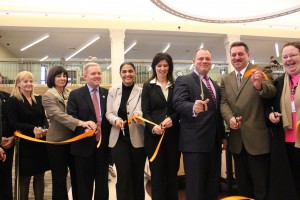 In the other corner were the elected officials, led by the duo of Council Members Elizabeth Crowley and Diana Reyna.

“In other parts of the borough, where two Council Members share an area, there’s a lot of finger pointing going on,” Galante said. However, in Ridgewood, both Reyna and Crowley worked together to get funding for the library.

Also instrumental were Assemblywoman Cathy Nolan, State Senator Joe Addabbo and Councilman Jimmy Van Bramer, a former Queens Library executive, who recalled that one of his first official duties for the library involved being harassed by Ridgewood library staffers about the state of their building in 1999.

The elected officials spoke about the importance of libraries and promised to continue their support.

Recent budgetary constraints have cut funding for Queens Library, but the legislators said the push would continue until libraries are properly funded again.

Addabbo said the fight for funding would continue until libraries—many of which had to cut weekend service—could serve the community seven days a week.

The Ridgewood library was built in 1911 and has become a community landmark. Nolan said she fondly remembers summer days spent in the building as a child. Massive renovations worried Nolan, but she was pleased the elegance of the building was maintained.

“I’m so thrilled children of our community will benefit from this library,” she said.