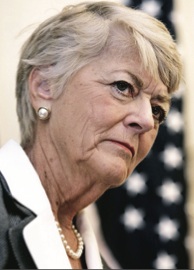 Geraldine Ferraro, the first female Vice Presidential candidate for a major party, passed away on Saturday due to complications with multiple myeloma. She was 75.

Ferraro represented New York’s 9th Congressional District—now held by Anthony Weiner—from 1979 to 1985. In 1984, Democrat Walter Mondale selected her to be his running mate for the presidential election. Ronald Reagan and Vice President George H. W. Bush soundly defeated Mondale and Ferraro to stay in the White House for a second term.

During her time in office, Ferraro was a fierce advocate for woman’s rights, and she served as the US Ambassador to the United Nations Commission on Human Rights for President Bill Clinton.

“Geraldine was a determined fighter for our nation and an historic figure who blazed trails for Italian-Americans, and especially for women,” Weiner said in a statement. “To residents of Queens, she was our hometown hero who never forgot her roots.”

“An inspiration to us all, Geraldine Ferraro helped pave the way for our daughters to achieve anything they set their minds to,” Crowley said. “I am proud to call Geraldine a leader, a mentor and most importantly, a friend.”

Ferraro was considered a model and inspiration for female legislators.

“I was proud to have known Geraldine Ferraro and admired her strength and knowledge,” Councilmember Karen Koslowitz  (D-Forest Hills) said. “She will be missed, but always remembered. She truly paved the way for women.”

A private funeral mass will be held in Manhattan on Thursday morning. Ferraro’s family has asked in lieu of flowers, donations be made to multiple myeloma research foundations.