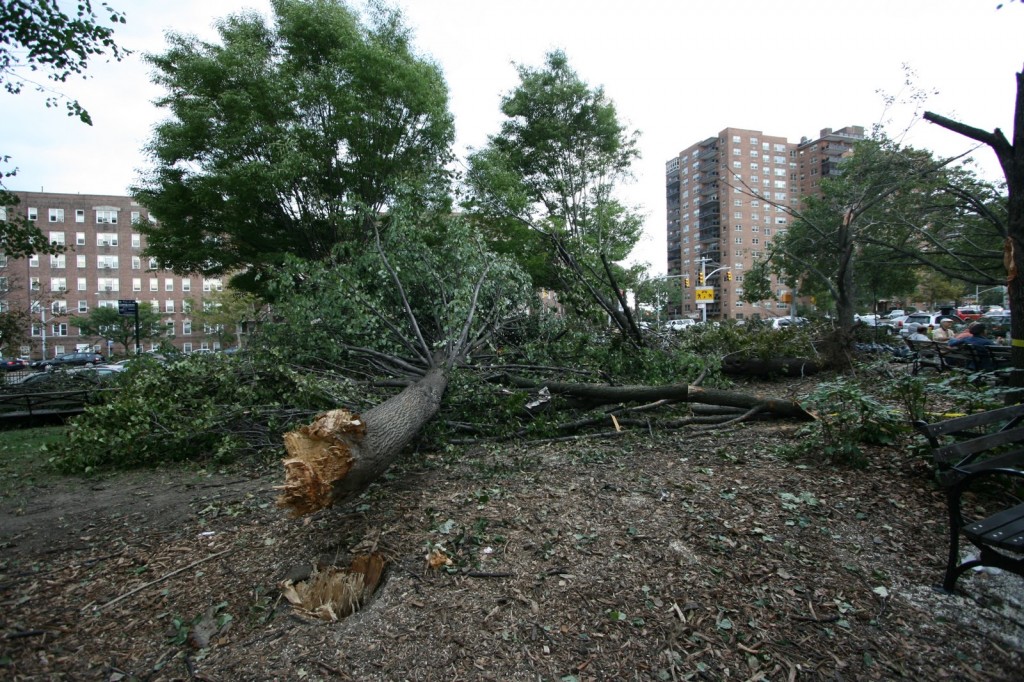 The scene at MacDonald Park after the tornado shows how many of the park’s trees were uprooted and destroyed. JetBlue and the Parks Department is looking for volunteers to replant trees in the area. (Photo courtesy of Michael Perlman/Rego-Forest Preservation Council)

MacDonald Park along Queens Boulevard in Forest Hills was always lush with trees. After the tornado last September, all that remained were tree stumps and fallen branches. Local residents are now being asked to donate their time to help replant trees throughout Forest Hills.

More than 3,000 trees were destroyed citywide, with nearly 2,800 in Queens. MacDonald Park lost most of its trees.

JetBlue, teaming up with the New York Restoration Project (NYRP), is holding its One Thing That’s Green event in Forest Hills on April 9. Volunteers will help replant trees in MacDonald Park and other areas around Forest Hills hardest hit by the tornado.

The event starts at 9 a.m. and will include deejays from 106.7 Lite FM, 103.5 KTU and Power 105.1. Breakfast and lunch will be provided. Games and contests and will be held throughout the day, making it great for a family event, organizers said.

Michael Perlman, chairman of the Rego-Forest Preservation Council, said it is important to rebuild Forest Hills and replace fallen trees. Perlman’s group worked with the NYRP and nominated Forest Hills for a replanting event.

“It is heartbreaking how living landmarks, some of which were here a century or more, succumbed in a matter of minutes,” Perlman said. “This event is a great means of various generations uniting for the common good.”

“Let’s restore the forest in historic Forest Hills,” he added.

Perlman said he hopes to see at least 600 volunteers, since it takes two or three people to plant each tree.

Volunteers must register at jetblue.com/trees and complete a waiver. Teens ages 14 to 17 must have a signed waiver from a parent or legal guardian.