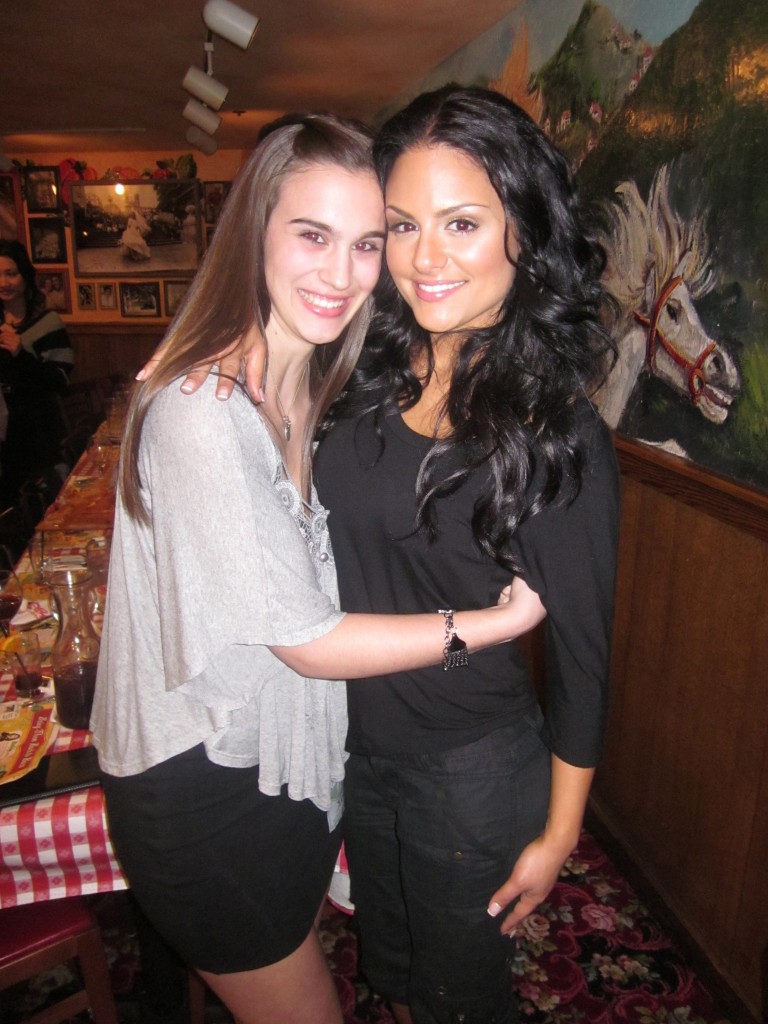 It’s a pretty safe bet that the majority of Howard Beach is tuned into Fox 5’s American Idol every Wednesday and Thursday evening to root on local singing sensation Pia Toscano. But for one of those Howard Beachers, the connection goes a lot further than from the living room to the television screen.

Dawn Marie Napolitano, remains “glued” to the screen for every second of every performance as her “big sister,” Pia Toscano delivers one stellar performance after another.  Pia has been her vocal coach for the last five years and serves as a mentor for the 16-year-old, who also intends to follow her dream of having a singing career.

Last week, Dawn Marie travelled to Los Angeles to the set of American Idol to visit with Pia.

“It was the most amazing experience of my life,” speaking about her visit to the show. “I cried the entire time Pia was singing.” Adding to the excitement, she was one of the audience members chosen to sing on the Idol stage during a commercial break.

Pia’s relationship with the teen began when the Idol star started singing in Current Affair, a wedding band started by Dawn Marie’s father, John. Since then, they have forged a close bond. Pia guided the teen through the application process at LaGuardia High School for the Performing Arts and has offered extensive vocal coaching—for Dawn Marie’s audition to the school, they prepared the Italian aria Caro Mio Ben. Pia and Dawn Marie even travelled together to the American Idol auditions in Jersey City last August.

Bernice Greene Fleischer, assistant Principal of Music at LaGuardia, explained the strong relationship between the two LaGuardia students. “They’re very close,” Fleischer said. “Pia is an absolutely wonderful influence on Dawn Marie. Pia is the real package … she’s got everything. She’s beautiful, talented and she’s a lovely person.” When asked if she thought Dawn Marie had the “stuff” that could allow her to follow in her mentor’s footsteps Pia’s music mentor replied with no hesitation—“DawnMarie? absolutely.”

Last year, locals got the chance to hear Dawn Marie’s voice when she sang the national Anthem at the 2nd Annual Howard Beach Relay for Life. The performance was in honor of her mother Mary, who has been battling cancer for the last five years. “It’s been so hard for all of us,” she said. “But having Pia by my side has helped me so much.”

And so at ages of 16 and 22, these two Howard Beach crooners have really been part of an exciting whirlwind. For Pia Toscano, the world seems to be her proverbial oyster right now. As for DawnMarie Napolitano, according to all sources, there may soon be another American Idol Golden Ticket on the Howard Beach horizon.