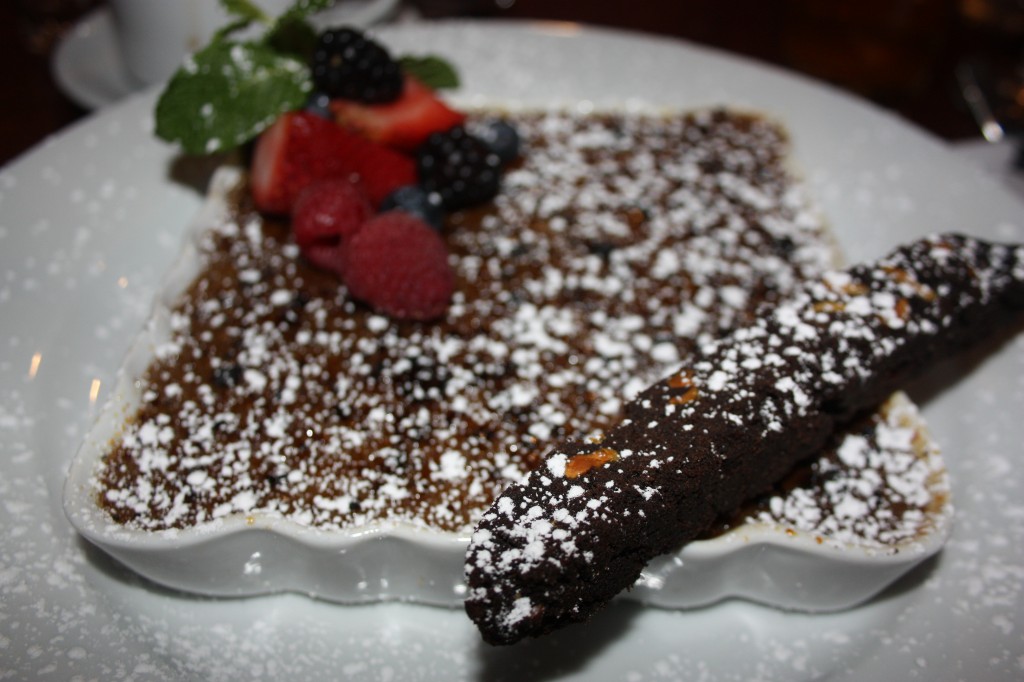 And speaking of open doors, stepping into Edison Place leaves diners on the fringe of an entryway with a beautifully polished bar to the left and seating for a very comfortable 50 plus on the right half of a sundrenched room.

The setting is smart, the color choices are soothing, the music—hits beginning with the big band era and ranging though today—piped in at just the right volume. And then there’s the floor. That’s right, the floor. For me it was a telling point of the restaurant. But for those of you who are not into floors—don’t worry I’m going to talk about the food in just a minute—I promise.

The handsome, stylish décor of Edison Place was tied ever so nicely together with a burned-finished cement floor that I couldn’t help but think: Guys with taste like this can definitely cook—or at the very least, hire a great chef.

Nestled a little off the beaten path of Myrtle Avenue, Edison Place sits on the corner of Cooper Avenue at 71st Street. Open seven days a week for dinner and drinks, the menu may well bring cries of “Hallelujah” from foodies all over Queens crying for more of what has been coined “New American” cuisine.

Eateries serving meat, vegetables, seafood—all accented by local influences—have been springing up in neighborhoods from one end of the borough to the other. Many have been lauded for their innovative menus and eclectic décor but share one common criticism: the often beautifully presented dish leaves you saying “Where’s my meal?” That’s not the case here. While plating and presentation were exceptional for both dinner and dessert, the portions were anything but small.

Alright, you’ve listened to me chatter about the ambiance—and the floor—now let’s talk about why we went there to begin with—to eat. We could choose cured salmon, grilled duck and cherry sausage and their version of a crab cake served with savoy cabbage slaw with horseradish dill vinaigrette for appetizers. There’s also the crackling pork belly served under compote of granny smith apples and seeded jalapeños; Two hearty slabs of smoky sweet bacon were well complimented by the tartness of the apple and a light heat from the peppers. After that the appetizer menu lists the crispy mushroom tart: a rich puff pastry with Fontina, ricotta and parmesan cheeses with a slice of speck ham, caramelized onions and truffle oil. The tart had very good flavor but did not live up to the “crispy” in its title. Nonetheless, a very satisfying experience for cheese and mushroom lovers alike.

Moving along to the entrees. Let me start by saying that the only reason to skip the appetizers is to get to the entrees quicker. The menu at Edison Place had at least three choices that were immediate standouts. The first was Duck Two Ways. Let’s be realistic. It’s hard enough for most restaurants to get it right one way. But going out on the “duck limb” and offering marinated grilled breast while promising the crisp skin and flavorful meat of confit on the same plate. Well my fellow duck lovers—unite freely and flock to Edison Place. You have found your niche.

Executive Chef Russell Titland’s treatment of this dish sidelined with a towering stack of potato pancakes and trimmed with dried cherries and kirsch sauce is simply the best duck I’ve had.  In fact, if Bobby Flay is reading this, I’m throwing Edison’s name in there for a duck throwdown. 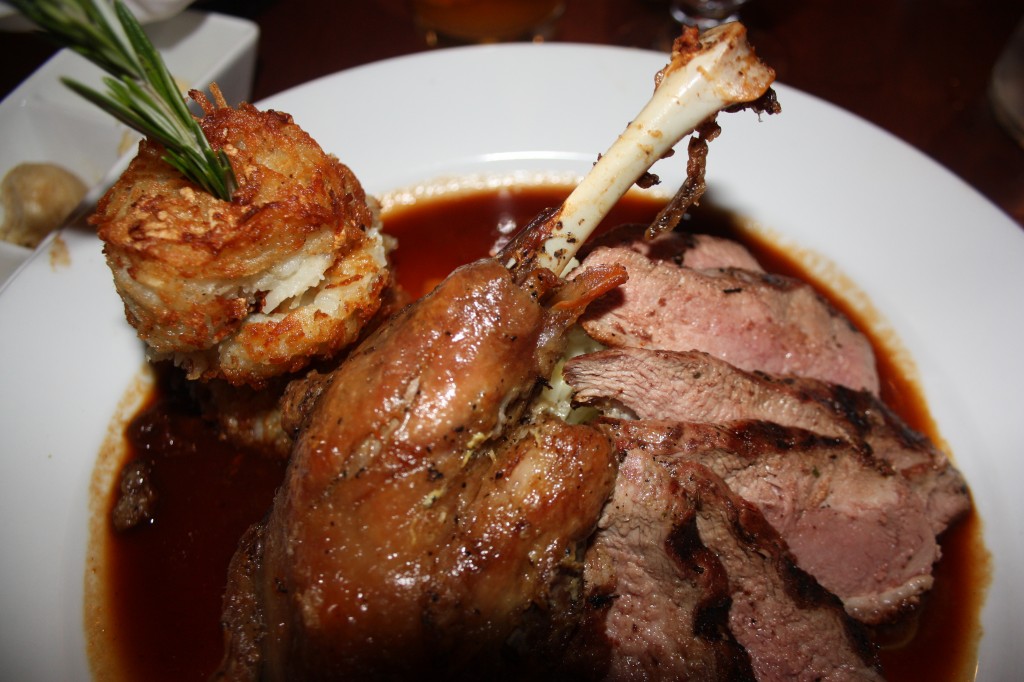 We were torn between the herb crusted rack of lamb and the pan roasted orange roughy, and in the end, the lamb won the toss. Presentation of this dish was especially nice—four individual chops, seared and crusted stood in the center of the plate resting on a bed of tender sautéed spinach, accompanied by a sweet potato gratin and dressed in mint jus. The meat was fork tender and cooked perfectly. Despite my own personal preference for duck, it is difficult to say which of these is the better dish.

Among the other menu choices is a free range chicken Kiev, served with garlic butter, sautéed spinach and whipped mashed, a 16-oz char grilled shell steak with potatoes and spinach, a daily pasta as well as a daily seafood presentation.

The menu represents a very well balanced selection for meat and fish enthusiasts and hosts a number of well portioned and well prepared sides including creamed and sautéed spinach, asparagus in Hollandaise, roasted forest mushrooms and battered onion rings.

For dessert we had the espresso crème brulee and berries and cream. The crème bruleé was wonderfully textured and the only thing we would have asked for was a little more espresso. A chocolate pistachio biscotti finished the dish. Always a good choice as far as I’m concerned, is any kind of berries with any kind of cream. Edison Place’s offering paired a nice selection of the big four–strawberries, raspberries, blackberries and blueberries—with a mound of sweet crème fraiche. For the more traditional dessert lovers, homemade doughnuts, assorted ice cream and sorbet (all made on site), a linzer torte and New York Cheesecake, are all available.

Edison Place also boasts a “fairly impressive” selection, according to my regularly consulted beer snobs, of beers both on tap and bottled. They have a selection of 20 rotating tap beers, as well as a solid choice of kraft beers from local and nationwide brewers. The bar area offers seating and food service from the menu for the more casual diner.

The staff is pleasant, accommodating and passionate in their delivery of the nightly specials. Two of the managing partners, Tim and Gus, circulated between the bar and main dining room, unobtrusively stopping by to make sure their patrons were content.

You should eat at Edison Place. The atmosphere is welcoming, the service is excellent, the menu is diverse and reasonably priced and the wine selection is good.  And by the way, the food is great.

The restaurant is at 71-28 Cooper Avenue in Glendale