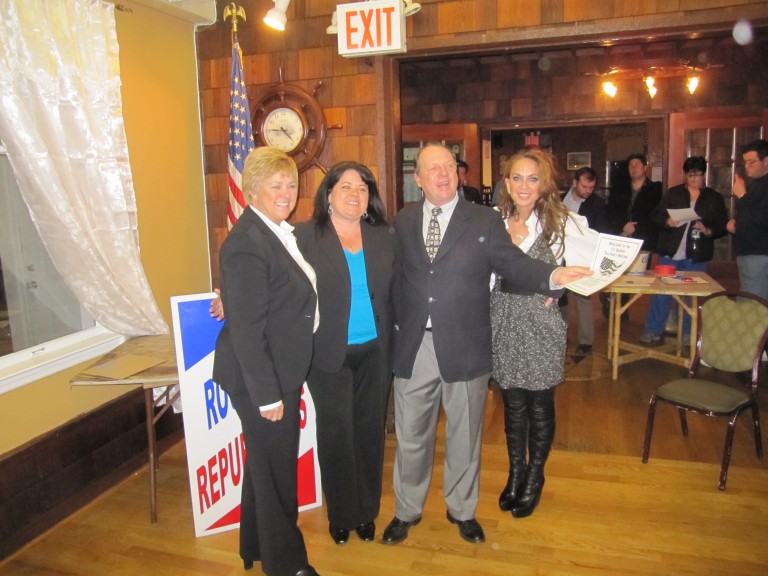 This week we thought we’d just stop by to check in on the movement going on in local Republican circles. You will remember we got the tide rolling several weeks back when we first told you about a little turbulence in the Ronald Regan Republican Club in Howard Beach. We hate to say we told you so—but—we told you so. It was here you learned the news that the club would relocate and that it would do so with a new president.

Thankfully, the club members were not at all discouraged by the inappropriate actions of some in this cast of characters, and so kudos to a membership that rallied together and last week elected a new slate of officers in their new monthly meeting spot at Lenny’s Clam Bar, under the watchful eye of Councilman Eric Ulrich.

The club’s new president, former Vice-President Joe Iaboni, took the helm after his nomination was the only one on the floor for the office of president.  Maryann Carey was re-elected to the vice presidency and Joann Ariola was also elected as a vice-president. Elected to the Sergeant at Arms position was local businessman John Calcagnile. Robert Gadomski took on the position of Secretary and Tommy Savoca was named Officer of Protocol.  Alan Bemben was re-elected as secretary.

“Especially encouraging about this meeting, in addition to all the new members,” said Joann Ariola “is the strong support from the other Republican clubs in our area.” Ariola was referring to both the Rockaway Republicans and the members present from the Angelo Gracie Republican Club in Ozone Park. Now, with a new home, new members and a new start, the club will focus its energy on building local party strength and positioning strong Republican candidates to win.

Over at the Rockaway Republican Club there was another election of note back in mid-March when Margaret Wagner of Broad Channel was elected president. Outgoing president Tom Lynch who had been at the helm of the club since its inception seven years ago, offered words of praise and encouragement to his successor and the rest of the new slate. “I am delighted,” Lynch said, “to hand over leadership to such young, talented and committed Republicans.”  Wagner says her main goals at the helm of the Rockaway group are to recruit new members, discuss the issues, increase the membership and get candidates elected.

Surely, all three area clubs will join with fellow Republicans for the final push in the much anticipated race for the state assembly seat soon to be vacated by Audrey Pheffer. Republican District Leader Jane Deacy is expected to mount a strong Republican effort against the Democratic choice—more than likely—Joann Shapiro, Pheffer’s current chief of staff. Deacy is a strong contender to deliver this seat to Republicans in the upcoming special election.

And on the Deacy campaign front, more than 100 Republican supporters gathered on a fundraiser for the District Leader and would-be the Assemblywoman at the Belle Harbor Yacht Club in Rockaway. Jane’s got the guts to go for the seat. As of Wednesday night, she’ll have some cash she has needed for the run.

Well enough about the Republican clubs for now. A quick trip to the flip side of the coin, we had a scare a couple of weeks back. We thought that Anthony Weiner may have abandoned his ambitions to be mayor in order to be a diplomat.  After all, his parking tickets were getting up there. Weiner has griped repeatedly about parking tickets racked up by United Nations diplomats in New York. A year ago, he issued a press release complaining that foreign governments owed $18 million in parking tickets. As for Weiner—his tab was slightly less—a mere $2,148. His office says the outstanding fines have been paid, but not soon enough for Weiner to avoid looking like a hypocrite.