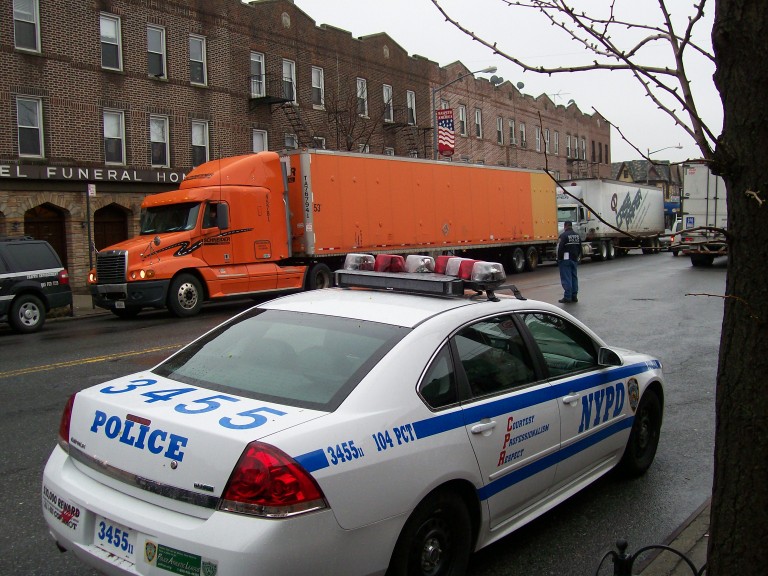 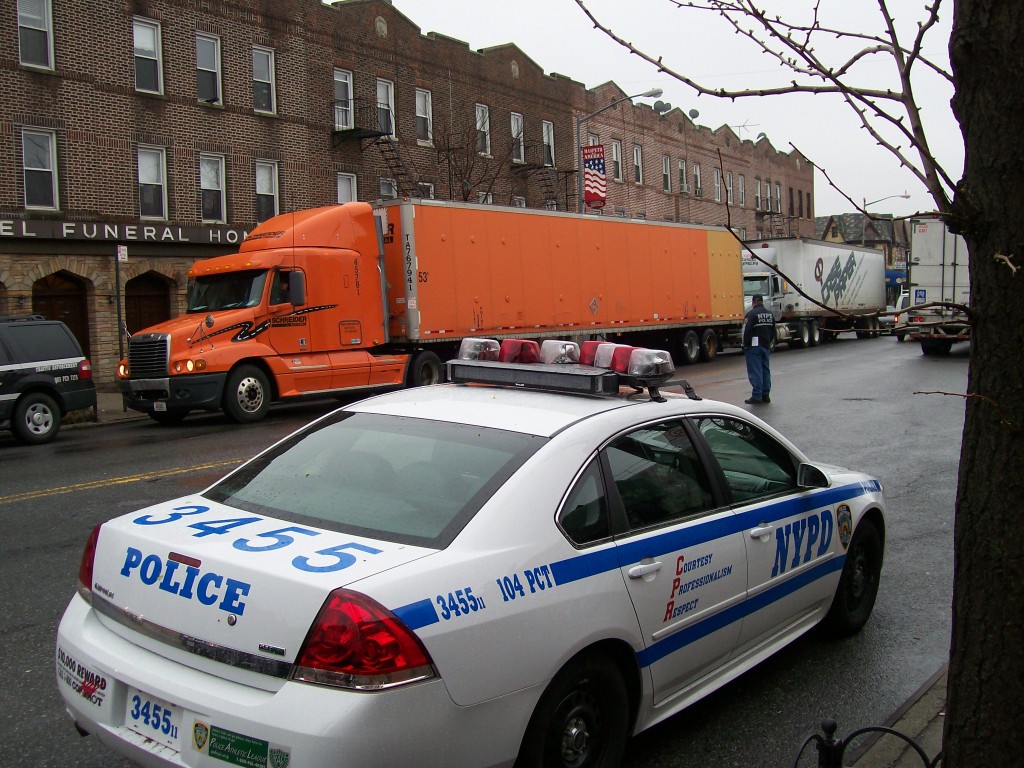 After constant prodding from local civic groups, the NYPD and the city and state transportation officials have started to ticket trucks illegally travelling along Grand and Flushing avenues in Maspeth.

Bob Holden, president of the Juniper Park Civic Association, has been asking the city to enforce the city’s truck rules for years. He has appeared severl times recently on local news outlets like WPIX advocating for enforcement. The city Department of Transportation (DOT) recently changed Grand and Flushing avenues from through truck routes to local truck routes: The new designation prohibits trucks from using the road unless making local deliveries in Queens.

Last Wednesday, the NYPD set up a checkpoint to ticket trucks, but Holden said it wasn’t enough.

This Monday, that’s exactly what happened.

The NYPD teamed up with the city and state DOT to enforce the truck rules. The crackdown checked that truck drivers were making legal delivers and also weighed and measured trucks. Trucks that were deemed a safety hazard were even towed away.

Nunziato has been a fierce advocate for alleviating truck traffic around Maspeth. Residents have complained that diesel fumes have led to increased asthma rates in their children. Business leaders in the community have said large trucks double parking in the area make it difficult to drive around and hurt small businesses along Grand Avenue.

The enforcement was a welcome sight, but Nunziato said it’s imperative the NYPD and DOT continue the effort.

“The key word is ‘started.’ You can’t just stop now. We have to send a message that these trucks are not welcome,” Nunziato said.

According to Mike Armstrong, spokesman for Assemblywoman Marge Markey (D-Maspeth), Monday’s actions were part of a push by DOT Queens Borough Commissioner Maura McCarthy to enforce the new truck route designations on Grand and Flushing avenues. The city DOT also plans to implement the Maspeth Bypass later this summer, which would direct trucks off Maspeth’s local roads, which will have to be enforced.

Markey, who has been working with the DOT for more than ten years for a solution to Maspeth’s truck traffic, said the enforcement shows a real sign of progress.

“The community has worked long and hard to make Maspeth cleaner and safer by getting illegal big trucks off our commercial and residential streets,” Markey said. “Maspeth has been a shortcut for truckers for too long. It isn’t enough to just change the rules; they must be enforced.”

“This is a step in the right direction—and will serve as a good temporary solution to the dire traffic situation while we wait for the Maspeth Bypass plan to take effect,” Crowley said.