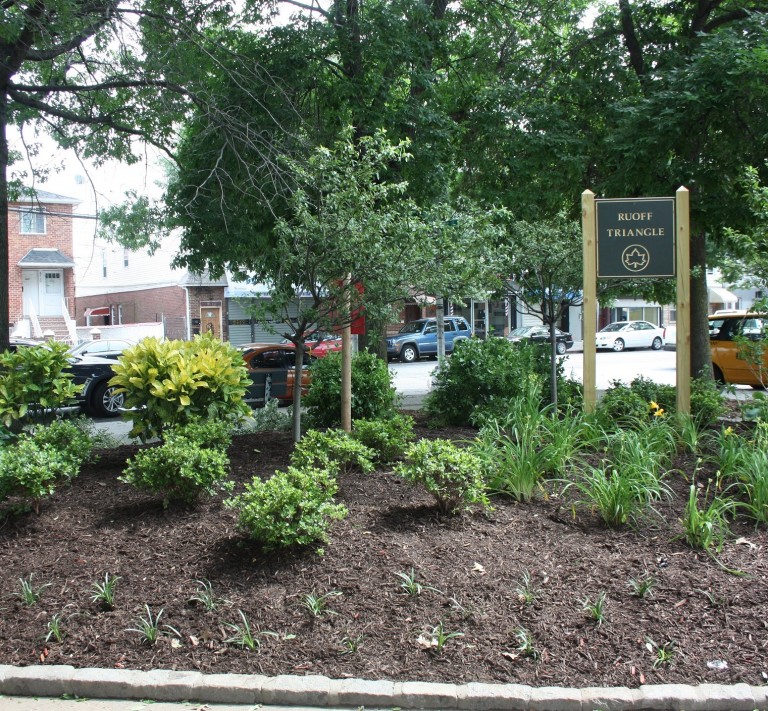 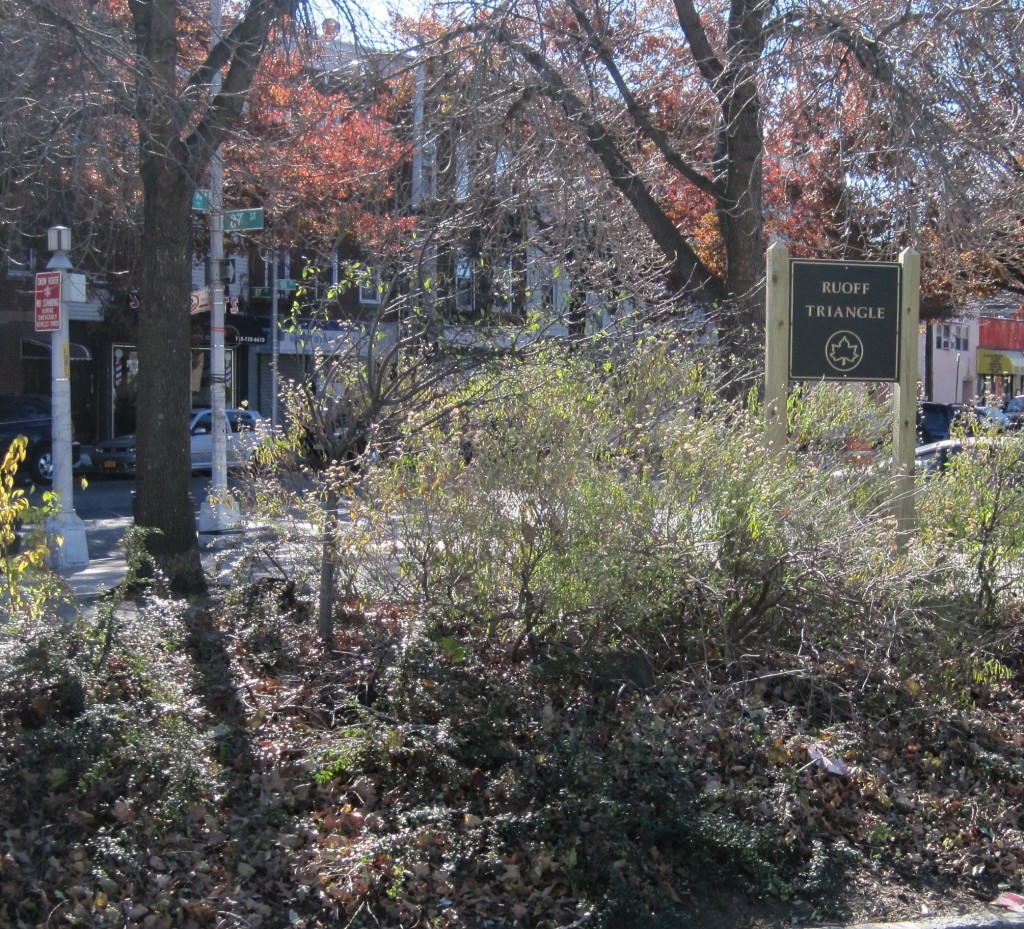 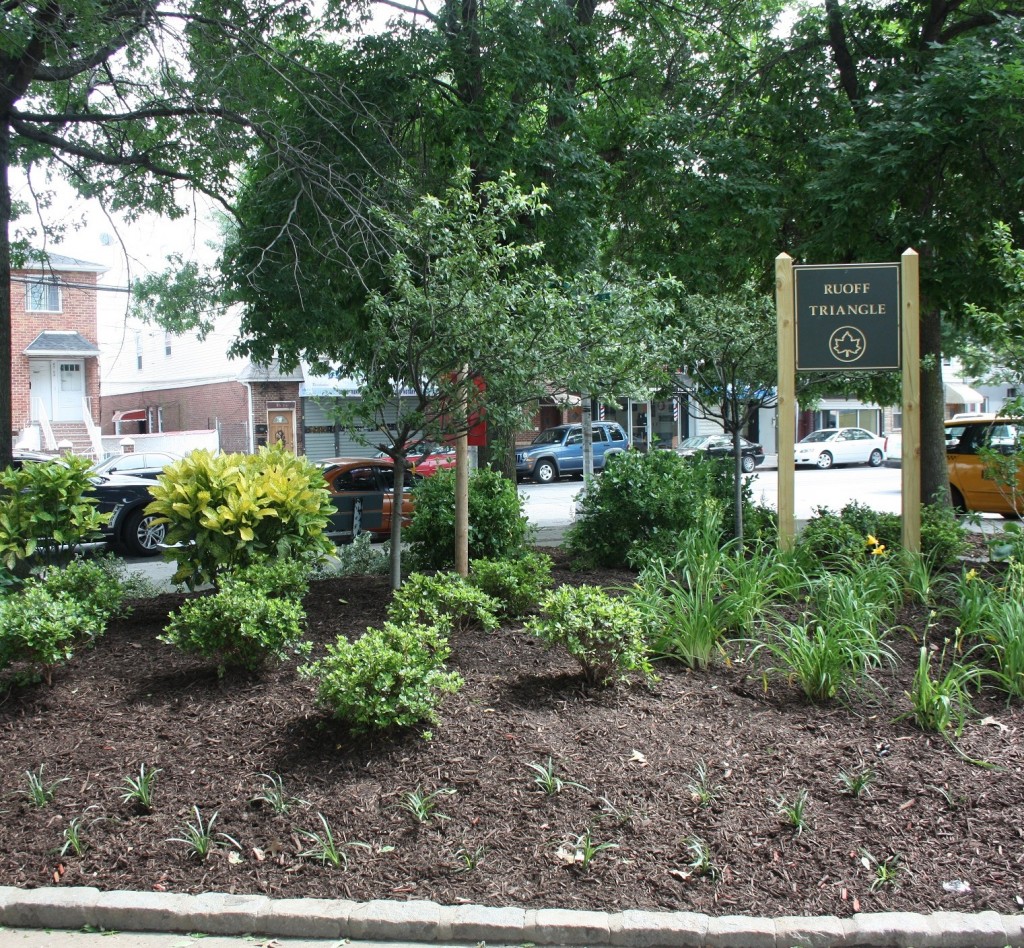 Residents passing by the triangular patch of land at 101st Avenue and 87th Street and Rockaway Boulevard now have reason to smile or stop and relax for a few minutes. The community beautification project at the Ruoff Triangle was launched and headed by the Our Neighbors Civic Association of Ozone Park and was completed on Saturday.

“This was a wonderful experience for everyone who took part in it,” said Sal Simonetti president of the civic. “We had some money earmarked for a special project and when this came up, our entire membership voted unanimously to get it done.”

The small triangle area was covered by overgrown brush, weeds and garbage and there was evidence that residents have not been curbing their dogs. But estimates to clean and create a “dream” green space in the community came in at nearly $13,000.

“There was no way we could ever afford to pay for a project of that magnitude,” said Simonetti. But the civic president wasn’t giving up on the idea and he contacted landscaper Sal Bacarella, well known for his quality work and for donating professional services to community projects. The owner of Astoria-based Garden Works Landscaping and Design, based in Astoria, didn’t hesitate to get involved.

“From the first time we spoke, I had every confidence that this man was going to try and do the best he could for us,” said Simonetti of Bacarella. But what the landscaper did for the Ozone Park community went far beyond anyone’s wildest dreams.

And despite the abundance of plants, flowers and shrubs he brought to the triangle, Bacarella did the project for a lot less “green” than anyone imagined—final costs for the project came in at one-fifth of original cost estimates.

At the end of the day, the combination of hard work, volunteer and charitable efforts and a lot of planting resulted in a transformation that left the formerly overgrown plot looking like a beautiful green oasis in the middle of a busy Ozone Park intersection.

The site was named for Corporal John Ruoff, the first resident of Ozone Park to die on the battlefields of Europe during World War I. Ruoff was killed in action on August 14, 1918, while fighting as a member of Company 1 of the 306th Infantry. The Corporal’s picture now hangs in the Memorial Room of Corporal John Ruoff Morelli Hargreaves American Legion post 632, located at 91-11 101st Avenue.

Residents can now sit on benches surrounding the triangle and admire the plants and foliage. “It’s almost like you’re in another world,” said Councilman Eric Ulrich who was on hand to assist with the clean-up and offer his thanks to Bacarella and the civic. “It’s great to see residents and civic members taking it upon themselves to improve their neighborhood.”

And as for the public’s feedback, Simonetti said he was thrilled by the comments of passersby who marveled at the beautiful space. “At the end of the day, our organization has much to be proud of and much to be thankful for. People like Sal Bacarella don’t come along every day. For us he’s like an oasis.”

Photo caption: Before and after shots of the Ruoff Triangle at the intersection of Rockaway Boulevard, 101st Avenue and 87th Street in Ozone Park show the dramatic transformation of the once overgrown parcel into a beautiful new green space offering residents a place to sit and relax in the heart of their community.