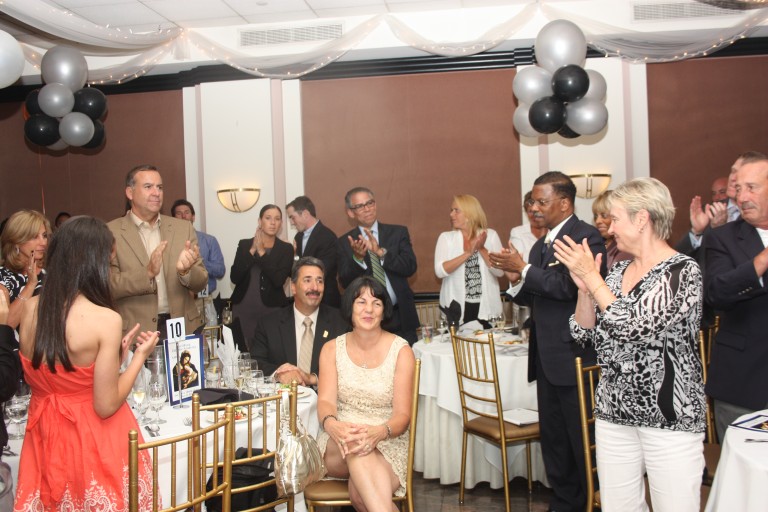 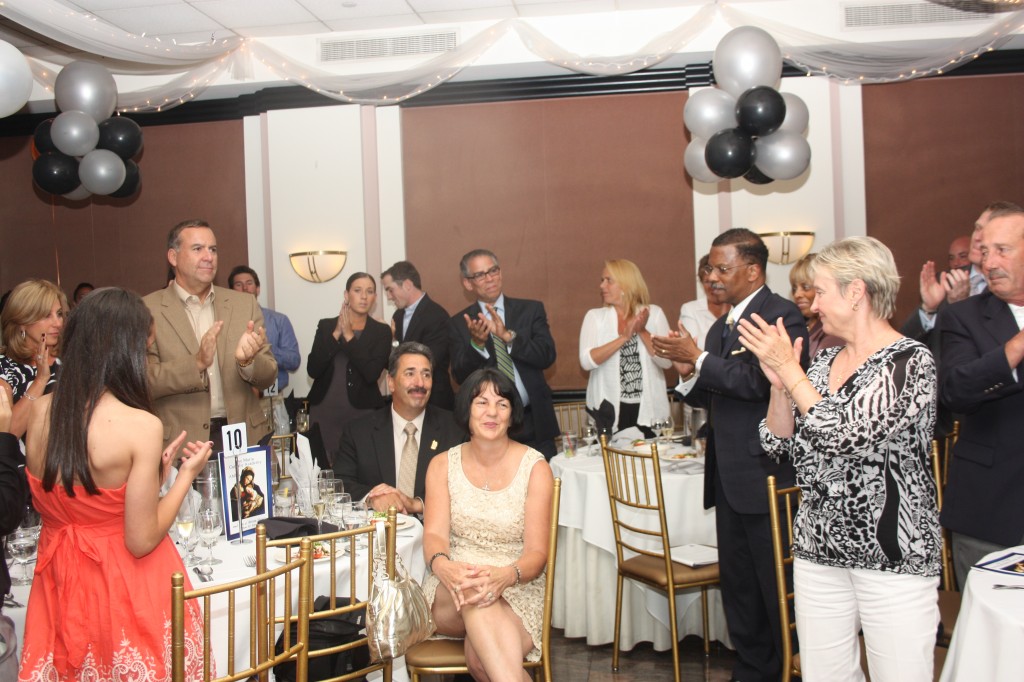 In establishing a new tradition at the event, last year’s honoree, Doctor Jerry Antonino was on hand to pass along a statue of the Blessed Mother, which represents the school, to this year’s honorees, Tony and Christine Modafferi.

The Modafferis were chosen as a result of nearly twenty years of devotion and service to the school community that, according to Principal Maria Cuomo, “could never be matched.” Fundraising chair, Doreen DeCandia echoed Cuomo’s sentiment about this year’s honorees. “Doing service is never about getting credit, and the Modafferis are people who define that–always there to help or to lead the way, avoiding the spotlight at all costs,” DeCandia said.

It was not just the administration and dinner organizers who lauded praise upon the evening’s honorees. An entire room of supporters including fellow parents, business colleagues, family members and friends, thanked the couple for their selfless actions on behalf of the parish and school communities.

Christine Modafferi, a lifelong Howard Beach resident, has been a part of the Our Lady of Grace family since childhood when she attended the parish school. She is the youngest of the four children of Frank and Edna Raffetto. “To me, there is nothing more important than my faith, my family and the Parish community,” Christine said. 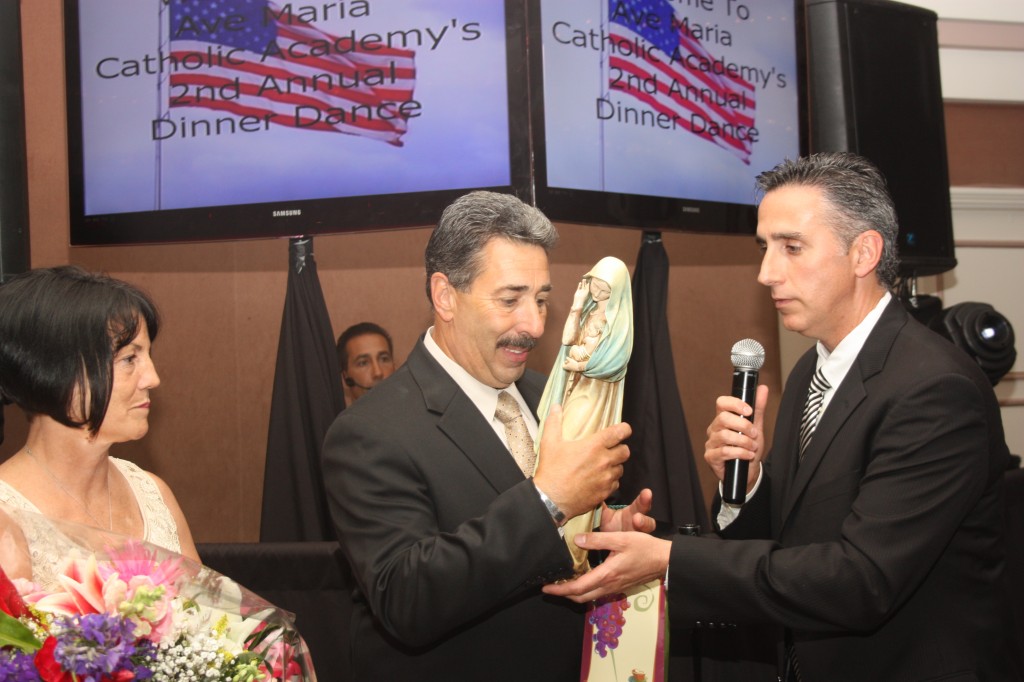 Her strong faith was rewarded months ago when she narrowly escaped tragedy on the Grand Central Parkway during a storm that resulted in the death of the driver of the vehicle behind her. Talking about the accident humbles Christine Modafferi, her voice lowers as she asks, “It makes you think, why me? How did I get so blessed?”

Husband Tony, a native of Bensonhurst Brooklyn also recalls that fateful day.  Frantic he couldn’t think of anything else but reaching his wife. “I got the phone call and all I could think was I’ve got to get to her. I have to get to my wife.” That closeness shared by the couple over the span of their soon-to-be 25 years together, began when they met in 1985.

Christine and Tony were married on July 27, 1986. They have four children, two daughters Tara and Kristen, and two sons Patrick and Sean. In January, they became grandparents for the first time when Tara and husband Will brought granddaughter Isabella to the family.

In addition to their many volunteer activities at the church and school, the couple has a very busy professional schedule. Christine has been in the banking industry for more than 30 years. Currently she is the Vice President and Retail Market Manager for TD Bank, where she oversees 12 locations on the west side of Manhattan and the Bronx.  Although Tony retired after 33 years with the NYC Transit Authority in 2007, he continues on with his music career. His band, Generation Gap, has been entertaining audiences for more than 30 years.

After a heartfelt introduction followed by one of several standing ovations, an obviously emotional couple offered their thoughts to the crowd. With a mic in his hand, Tony’s flair for the performing arts became obvious. “My wife is great at volunteering—me.”  Following the eruption of laughter throughout the room, Tony Modafferi made everyone understand what he and his wife were doing there. “It is always our privilege to help out and we’re thankful for the fact that we are able to do it.” 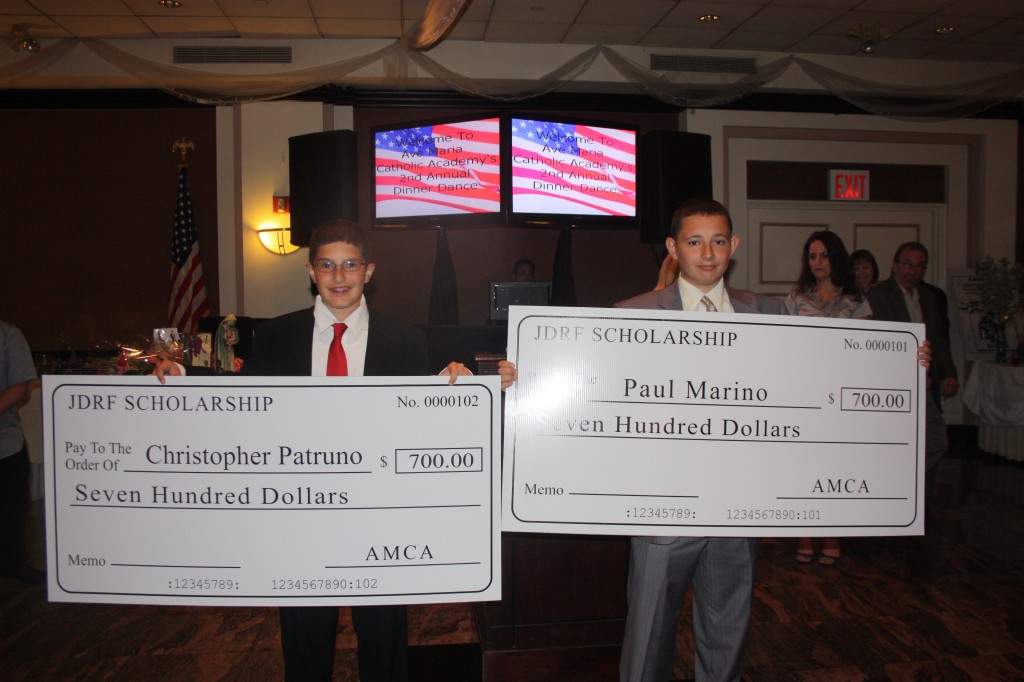 Christine was intent on pointing out that even when the last of their school age children had passed through the halls of the Ave Maria Academy, their commitment and dedication could always be counted on. “We are strong advocates of the benefits of Catholic education, always have been and always will be. It doesn’t matter whose children are in this school. We will be here to help pave the way for more to keep coming.”

The great success of the evening could be attributed not only to the honoring of the Modaferris but to the efforts of the dinner committee and its chair Doreen DeCandia. Since assuming her role as the chair of parish fundraising, DeCandia has quickly become recognized as a powerful force driving events to generate funds for the operation of the school. She has coordinated a multitude of efforts raising much needed funding throughout unsettling financial times. For this event she convinced husband, Joe DeCandia to host the event at his Roma View Catering venue, where the school could realize their greatest margin of profit. “She happens to be my wife, but I get out of her way when she’s trying to raise money.” Joe DeCandia says with a big smile. “You don’t want to get in the way of a Catholic school mother. They’re very determined, to say the least.”

And it’s a passionate commitment to strong Catholic values that Doreen credits the success of her fundraising to. “All of our efforts to raise money are rooted in the principles on which we were raised. My husband and I are both dedicated to seeing strong Catholic values prevail in our children and in others.” Additionally, she has successfully combined her fundraising for the Juvenile Diabetes Research Foundation with some of the school initiatives.

The success of the evening was further highlighted when Christine’s colleagues at TD Bank presented the school with a five thousand dollar donation in her name. The school also awarded two seven hundred dollar scholarships sponsored by the Juvenile Diabetes Research Foundation to students Christopher Patruno and Paul Marino.