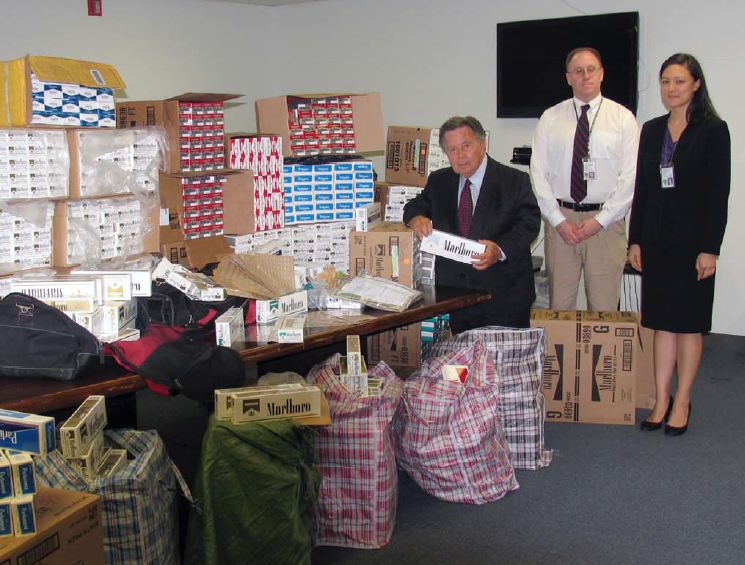 The crackdown on untaxed cigarettes continues, and Queens District Attorney Richard Brown has another room filled with illegal smokes to show for it.

Last Friday, Brown’s office announced the arrest of two Elmhurst men and the seizure of more than 1,800 cartons of cigarettes and $32,000 in cash.

“Cigarette smuggling to evade state and local taxes is a multimillion dollar industry,” Brown said. The illegal sale of cigarettes cheats the city and state out of much-needed revenue in these tough economic times.”

The defendants, Hongan Lai, 61, and Ming Gao, 33, both of Elmhurst, were arraigned last week after a the newly created Crimes Against Revenue Unit (CARU) served warrants on the garage where they kept their stash.

The search took place at a garage at 48-17 91st Street in Elmhurst on June 28 and 29, where investigators searched two vehicles, one registered to Lai, the other to Gao. Both defendants are charged with violating the Cigarette and Tobacco Products Tax; Lai is also charged with possessing a forged instrument and trademark counterfeiting.

Along with the 1,800 cigarette cartons confiscated were nearly 3,400 counterfeit Virginia tax stamps.

According to Brown, many of the cigarette cartons seized were counterfeit, while others were purchased in Virginia. Still others were marked with illegal Virginia tax stamps.

The CARU, which investigates and prosecutes individuals and businesses that deliberately fail to pay taxes associated with legal and illegal activities, has helped seize more than one million untaxed cigarettes this year.