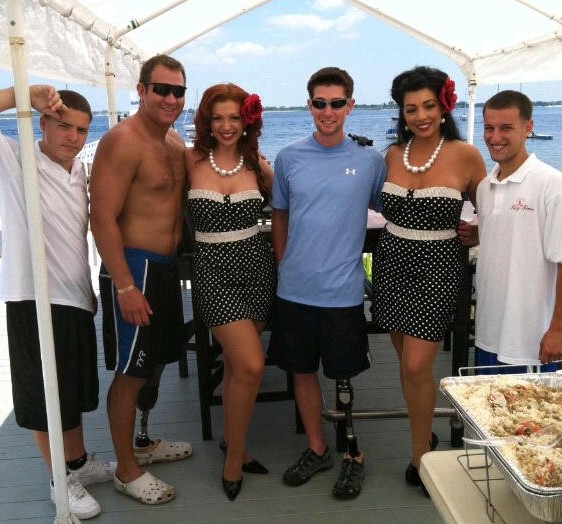 The Wounded Warrior project held its 7th Annual Adaptive Water Sports Festival in Rockaway Point over the weekend. The event is a partnership between the Wounded Warrior Project and Disabled Sports USA, which offers soldiers wounded in the war on terror the opportunity to learn adaptive water sports.

Specially trained volunteers from the FDNY were on hand to teach these sporting skills to combat veterans with amputations and other severe injuries. Activities for this year included waterskiing, kayaking, scuba diving, sailing and fishing.

But sports weren’t the only thing on the minds of a very appreciative crowd of soldiers back from Iraq, Afghanistan and other war zones. They proved to be quite a hungry crowd and on hand to feed them once again this year was Angelo Gurino, owner of Ragtime Gourmet in Howard Beach. “I don’t know of anyone more deserving of good food and fun than these people,” Gurino said of the Wounded Warriors. Having donated the food for the event over the years, Gurino says he would never miss it.

To that end, Gurino brought along his youngest son, John and nephew Sal to help set up tray after tray of specialties from the family’s gourmet deli. “These guys will be around for a lot of years to keep serving the troops,” he said of the young family recruits. “I can’t believe that people survive what they have been through and still go on. It’s amazing and as long as they want to eat, we’ll keep feeding them.

Each year families from the Rockaways open their hearts and homes to dozens of severely injured soldiers. The project was launched in the Rockaways through the non-profit organization the Graybeards, which is dedicated to helping those in need. For more information on this event and on how you can participate in next year’s, contact them at graybeards.com