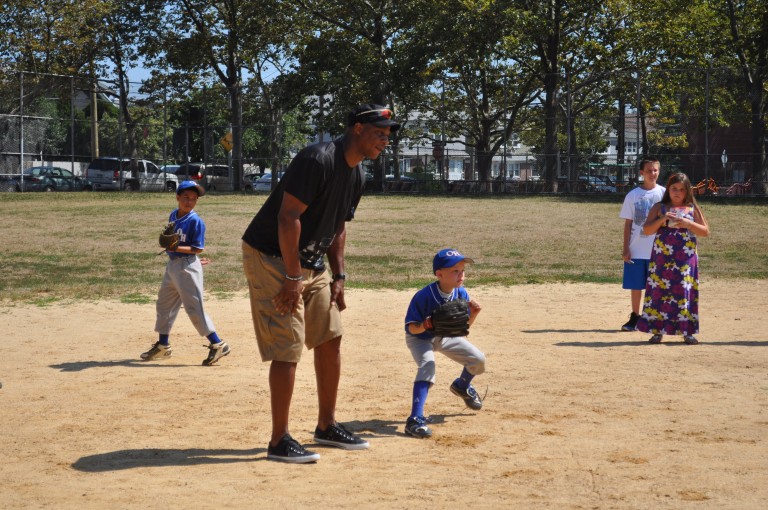 When the kids from the Ozone-Howard Rangers Little League came to practice on Tuesday afternoon, most of them had no idea that a former Major League baseball All Star player was going to drop by to give them some advice.

Former Yankees and Mets outfielder Darryl Strawberry stopped by Centerville Field in Centerville to give the Little Leaguers batting and fielding tips and sign autographs before their game Tuesday evening in Glen Cove.

Mike Frazzetta, who coaches the team with Nick Loprinzie and Al DeAndrea, organized the guest apparence after he and his wife had dinner with Strawberry at his restaurant, Strawberry’s Sports Grill in Douglaston.

“This is what it’s all about,” Strawberry said. “I told him I would come out and see the boys and I did. That’s what I do.”

As soon as he arrived, the Little Leaguers ran up to Strawberry and huddled around him. Some chanted “Darrryl, Darrryl” a chant made popular during Strawberry’s playing days.

After giving them some words of advice, he split the teams up and had them practice fielding ground balls and throwing from first base to third base.

“That’s it, that’s it, Don’t you just love this?” Strawberry said as he began coaching the seven year olds.

Strawberry then picked up a bat and gave the Little Leaguers some tips on how to improve their swing.

“Don’t put pressure on yourself,” Strawberry said. “Just go up there, see the ball and hit the ball.”

Though some of the little leaguers knew about Strawberry’s upcoming visit, Jobe Cubillan, 9, didn’t have a clue that Strawberry would be coming to visit his team.

“Surprised,” was Cubillian’s main reaction as he saw Strawberry walk onto the field.

Cubillian’s parents, Wilbert and Mary Joy, were told that Strawberry was coming beforehand. Although some parents revealed to their kids about his upcoming visit, Wilbert chose to keep it a secret.

“I didn’t tell him,” Cubillian’s father, Wilbert said. “I wanted him to be surprised.”

Before Strawberry waved goodbye to the little leaguers, he left them with a special gift.

Strawberry signed 45 pictures of himself, which were a mixture of his playing days with the Yankees and the Mets, and handed them out to kids and adults who were hoping to get their hands on a autographed picture.

Frazzetta said that Strawberry’s visit was in the works for about three to four months and that he was glad Strawberry kept his promise to visit his players.

“I think more of him as a human being than as a baseball player. He’s an absolute gentleman,” Frazzetta said. “And we’re all gonna go to his restaurant Friday night.”