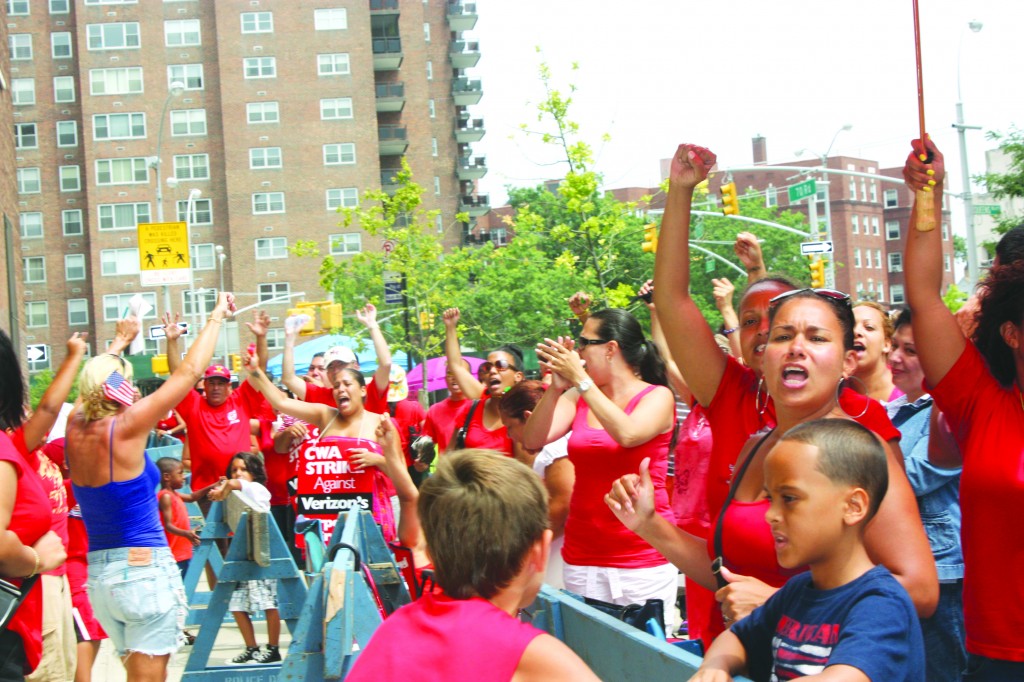 More than 250 striking Verizon workers pumped their fist in the air and chanted throughout the day at motorists and pedestrians who found themselves on what is usually a much quieter block of 70th Road in Forest Hills.

Over and over, throughout the day they rose to their feet, encouraging solidarity for their cause from any passerby that would listen. “We are out here fighting for our lives,” said Verizon rep Desiree Tucchio, who lives in Ozone Park. “But we have a strong union and we will stick this out and win.”

About 45,000 workers from the Communications Workers Association (CWA) walked off the job on August 6, after labor negotiations broke down. It has been 11 years since Verizon last faced a strike. According to the company approximately 135,000 workers out of its total 195,000 are non-union workers, and they say their customers are noticing only minimal impact from the strike.

“Our contingency plan is in full effect, and our management employees are stepping in to cover our workload,” said Bob Mudge, Verizon president of consumer and mass markets.  “We are committed to delivering excellent customer service, and that’s exactly what we plan to do.”

Speculation from labor analysts is that Verizon’s history of good relations with its unions over the years will keep the strike short. The same experts agree that labor strikes are rare now, and the National News Media Guild confirms that 98% of union contracts in the United States are settled each year without a strike.

The Verizon building on 70th Road is used as a multi-lingual center where representatives serve customers that do not speak English. Services are offered in Spanish, Italian, Korean, Chinese, Russian and a host of other languages.

The center is one of many other buildings throughout Queens, including Jamaica, Flushing and Elmhurst that house specialty services offered by the telecom giant. This week though, the buildings were staffed by managers who met with angry strikers outside the facilities.

Robert P. Shannon, vice-president of the CWA, Local 1105 says that the membership is prepared to go the distance to have their demands met. “We’ll be here as long as it takes,” said Shannon. “In 1971 we were out for seven months and in 1989 for four months. We’re not going anywhere until we get what we want.”

And Shannon says that members, who are required to do between 12 and 19 hours of strike duty each week, are showing up to do double and triple that amount of time. “[Members] are bringing their families with them in support of each other. They are coming down off their shifts to show solidarity,” Shannon said.

CWA Communications Director Candice Johnson maintains that Verizon workers are waiting for management to demonstrate their willingness to bargain. However, she says the company instead continues to cancel bargaining sessions.

“Verizon employees have been waiting since June 22 for management to bargain at all. Even at contract expiration, Verizon continued to demand $1 billion in concessions per year. That’s $20,000 for every worker. That demand is coming from a $100 billion company, where the top five executives got compensation of $258 million over the past four years,” said Johnson. “Verizon’s concession demands would strip away the middle class standard of living that workers have gained through bargaining over the past 50 years. Verizon is following the Wisconsin playbook and it’s wrong.”