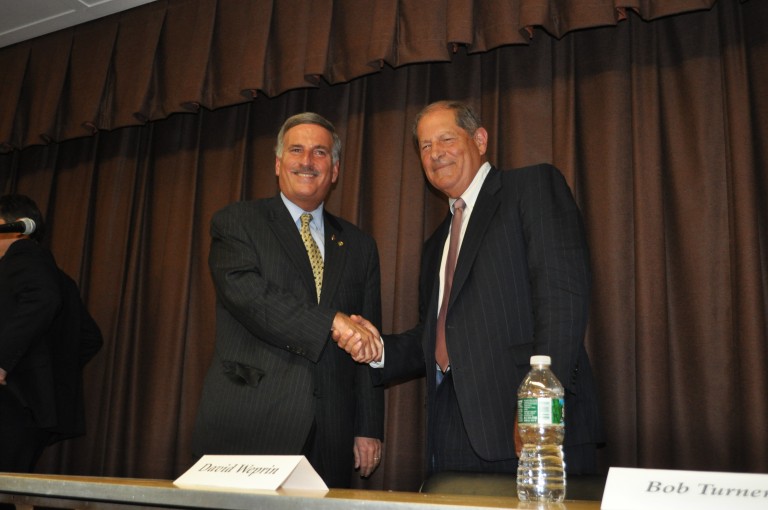 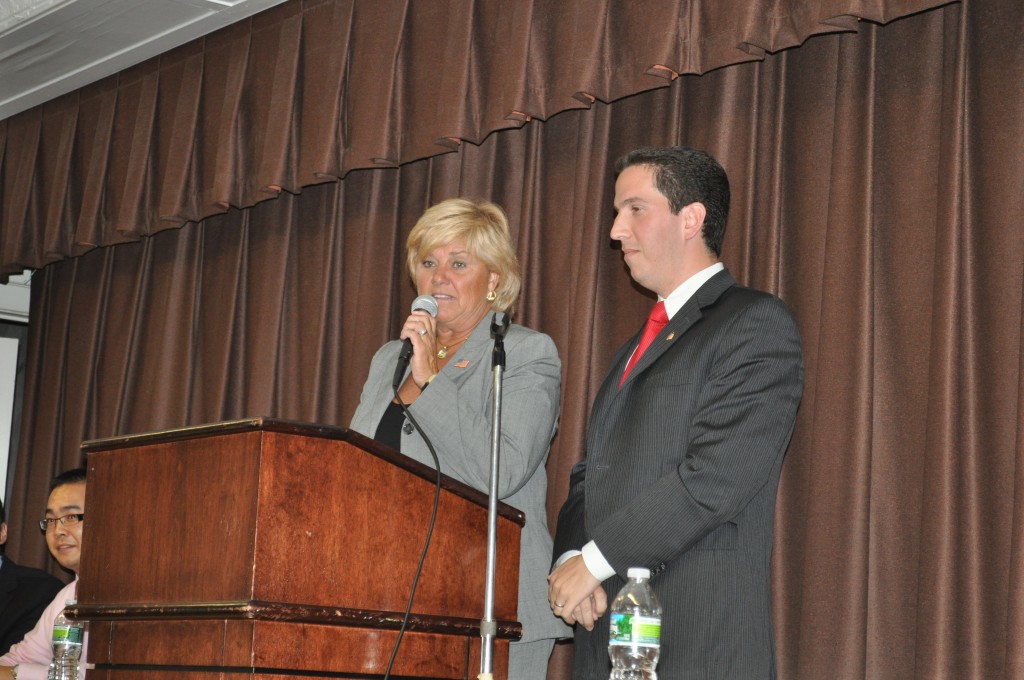 With the September 13 special elections less than a week away, The Forum and the Queens Chronicle hosted a debate at St. Barnabas Church in Howard Beach—one of the last opportunities voters in Queens had to hear directly from candidates.

Deacy is a former police officer and one of the first women to serve on patrol in the city. She is currently one of the Republican district leaders for the area.

When asked about creating jobs, Goldfeder said he is a strong supporter of two projects that are ongoing in the district. First, the state has selected Genting to open a racino at Aqueduct racetrack in Ozone Park, which created thousands of short-term construction jobs and will result in hundreds of permanent jobs in the area. Goldfeder also touted the state’s push to convert the now abandoned Feinstein Center in Howard Beach into affordable senior housing—a move that would create more construction jobs in the area.

“I have a record of working between the aisles to get jobs to the community,” said Goldfeder.

Deacy countered that the way to bring permanent economic stability to the area is through tax cuts and incentives. She said the MTA Payroll tax, which taxes certain small businesses to help subsidize the MTA, had to go. These types of taxes make it increasingly difficult to survive and remain viable, Deacy said. Other methods include creative tax credits, such as the one sponsored by Governor Andrew Cuomo that gives $3,000 to employers who hire people from the unemployment line.

“That’s how we’re going to get jobs,” Deacy said.

The “millionaire’s tax,” which Cuomo let expire, became a major economic issue for the candidates. Deacy said the solution was to cut taxes rather than implement more, but Goldfeder countered that “everyone should pay their fair share.”

The candidates also sparred on a number of other issues. On hydrofracking for natural gas, a controversial measure that some argue would create jobs while others say would irreparably harm the state and city’s water supply, Deacy offered tepid support.

“There needs to be a completed study to make sure it doesn’t damage the New York City watershed … and health is not at risk,” she said. But ultimately, if those studies showed the process was safe, she would support the process, Deacy said.

Meanwhile, Goldfeder offered an emphatic “no” to the question.

“If there is any chance our water supply is at risk, the answer is no,” he said.

The two candidates did find some common ground in their statements. Both agreed an independent commission should be created for the redistricting process that occurs every 10 years.

“Absolutely, we need to be accountable and do things in a fair and equitable way,” Goldfeder said.

Both candidates also criticized the MTA for providing inadequate bus and subway services while continually raising fares and tolls, particularly the increase on the Crossbay Bridge, which now forces residents of the Rockaways to pay every time they want to leave the area—previously, Rockaway residents were exempted from the toll.

On more localized issues, Deacy said she was excited to work with the Aqueduct racino and ensure there is police presence and that quality of life does not deteriorate in the surrounding neighborhoods. Goldfeder said he was very concerned about the recent traffic changes made at Rockaway Boulevard and Liberty Avenue, which some business owners have claimed hurt their stores.

Following the Assembly candidates, Democrat David Weprin and Republican Bob Turner, facing off to replace Anthony Weiner, who resigned after sending explicit images to women on social media websites, took center stage in what has become an increasingly tight and heated race.

Weprin has a long career in politics and currently serves on the state Assembly. Prior to that, he was on the City Council for eight years, serving as the Chair of the Finance Committee and worked under Governor Mario Cuomo’s administration.

Turner is a businessman who, in his words, was “fed up” with the current system. He worked at a major media corporation that helped produce numerous high-profile talk shows including the Jerry Springer Show.

Barbs were traded immediately with the first question regarding tax rates at different income levels.

“We need millionaires and billionaires to pay their fair share in taxes,” Weprin said. He mentioned the recent op-ed written by multi-billionaire Warren Buffet for the New York Times, which pointed out that through certain loopholes and capital gains, he pays a far lower percentage of taxes on his income than his secretary.

Turner argued that even taking everything from all the millionaires and billionaires in the country would not be enough to solve country’s growing deficit problem.

“We need capital gains incentives,” Turner said. He reminded Weprin that the federal deficit currently sits at $14 trillion, but Weprin countered that the deficit is only $1.4 trillion.

The current national debt is at $14 trillion and rising, and the latest federal budget is operating at a $1.4 trillion deficit.

Turner said the country is facing a serious problem, and without sensible decisions and real leadership, the country could face complete financial ruin within 10 years. He has set up a long-term plan that would cut roughly 35 percent of the federal budget.

“Currently we are overspending by about 45 percent,” Turner said. “We [need to] begin a major restructuring of our programs and priorities.”

Weprin conceded that there was “fat” in the budget, “but I don’t want to totally eliminate programs like my opponent.” He also emphatically stated that he would cut spending from the budget. “We need to do it with a scalpel, not a hatchet,” Weprin said.

Discussing the upcoming speech by President Barack Obama on jobs, Weprin said the government should implement a national jobs bill.

“Everywhere I go, people are graduating with college degrees and can’t find jobs,” he said.

Turner seemed flabbergasted by that idea. “Another jobs bill, another stimulus, another trillion in pork. Haven’t we had enough,” he said.

Regarding corporate tax loopholes, Weprin said that he would close loopholes that allow companies like General Electric to ship jobs overseas while paying no income taxes. Turner, however, seemed stumped by the question. First, he jokingly said, “as a Republican, I never met a tax loophole I didn’t like.” He then admitted that he didn’t know of a loophole he would close.

Questions also centered on the state of Israel, which has become a major issue during the race. Weprin is an Orthodox Jew, but Turner was endorsed by former Democratic Mayor Ed Koch, also an Orthodox Jew, because of his support of Israel and the message it would send the White House.

“I have a lifelong commitment to the state of Israel,” Weprin said. He mentioned that he has family living in Israel and went on several missions there.

Turner didn’t deny Weprin was a strong supporter of Israel, but said it was about the message.

“It’s not a question about support. It’s about effectiveness. A Democratic loss here will scare the Democratic party and policy makers will be pushed further back in Israeli policy and economic sanity,” Turner said.

The final major issue during this race and debate was entitlement programs for seniors, mainly Medicare and Social Security. Both candidates offered their support for the programs.

“These are critical, we need to protect this for generations to come,” Turner said. “On the course that we’re going, we’ll bankrupt the system.”

Turner said that Social Security is a successful program, but the finances are in serious trouble. He said serious changes, including raising the retirement age, might be necessary to keep the system solvent. Weprin remained steadfastly opposed to the idea and said the retirement age should remain as it is.

In more localized issues, Turner said he would focus on mitigating the noise and odor problems Middle Village and Maspeth residents endure from the railroad companies. Weprin mentioned repaving and renovating the Belt Parkway as one issue he’d like to tackle.

While both candidates brought an extensive peanut gallery to cheer them on, the debate remained civilized. One man was escorted out of the building after antagonizing Weprin about his role in the city’s slush fund scandal, in which millions of taxpayer dollars intended for non-profits were used to pay for political favors while Weprin was the Chair of the City Council Finance Committee.

After the outburst from the man, Weprin quipped, “This reminds me of a show my opponent helped put on the air—Jerry Springer.” 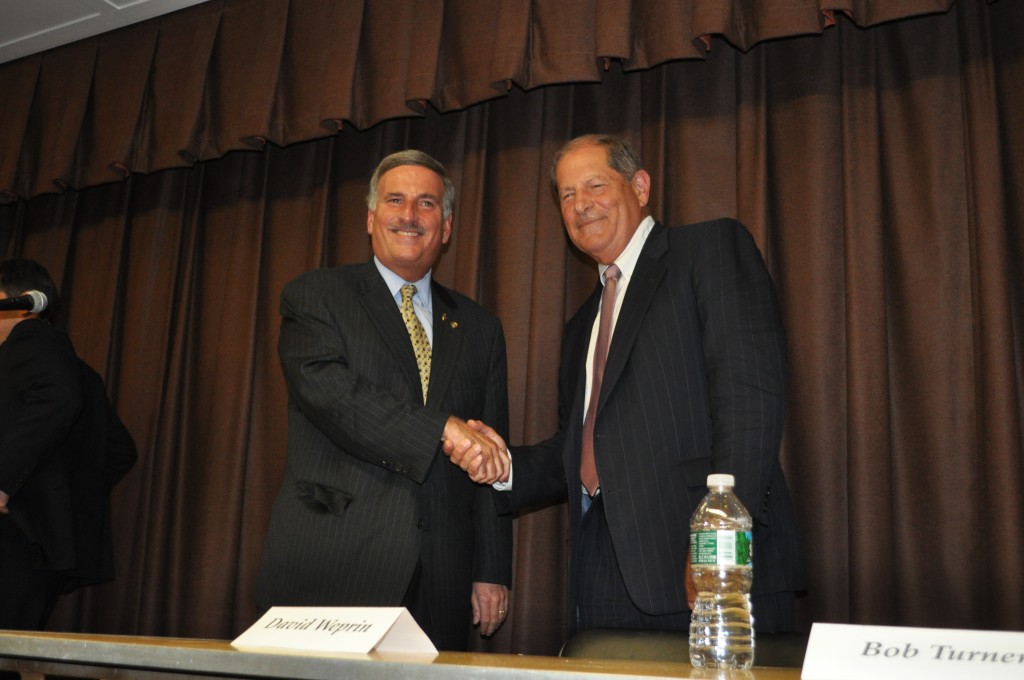