With the opening of the new casino at Aqueduct racetrack quickly approaching, executives from Resorts World Casino held a tour of the new facility.

The venue’s new centerpiece, the Times Square Casino, which will feature 2,280 video lottery terminals (VLTs) and 205 electronic table games (ETGs), is set to open by the end of October.

“[The Times Square Casino] was modeled and built on a Times Square experience,” said Resorts World President Michael Speller. The floor of the casino will be “vibrant,” full of lights and various amenities that would make the casino a great gathering place, Speller added.

Part of the non-gambling features of the casino is Bar 360, which occupies the center of the casino. Featuring a 28 foot by 18 foot high definition television and a stage for musical acts and other entertainment, Speller said the bar would be a great destination area to relax and watch the game.

Food and dining options are another important aspect of the casino experience. The Aqueduct Buffet will serve food from all over the world and feature artwork accentuating the history of the racetrack. A food court featuring burgers, traditional Mexican food, Asian noodles, a Popeye’s and a shop by celebrity chef Wolfgang Puck is expected to serve more than one million 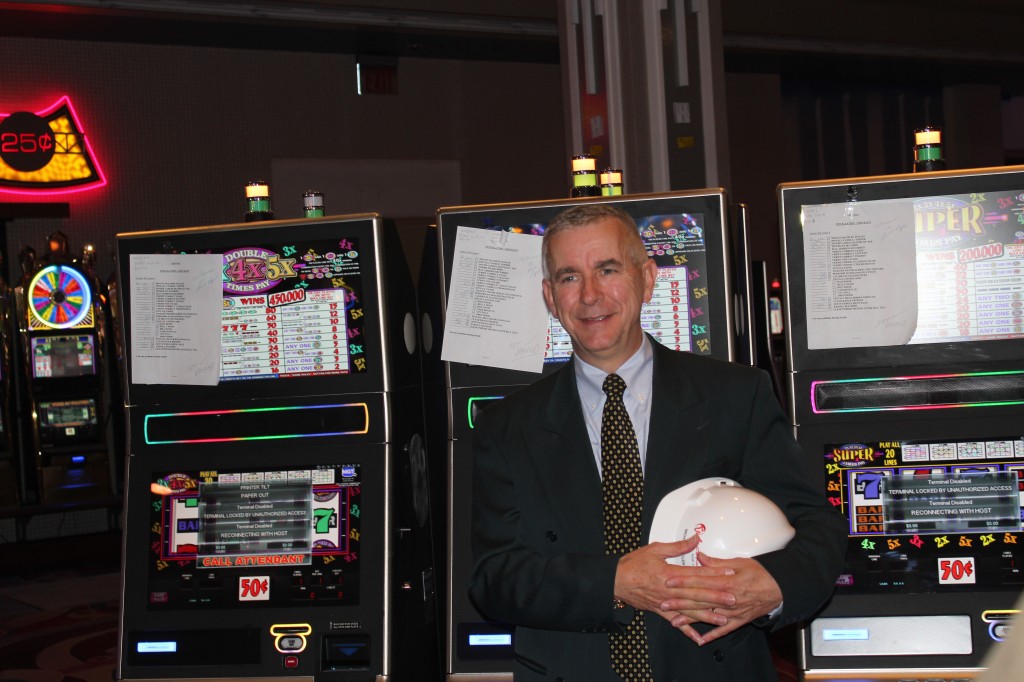 Speller stressed that the food options at the casino create a family friendly environment, especially since there is an entrance that bypasses the casino to the food court.

“It was designed specifically so families can use the property without ever using the casino,” Speller said.

Walking through the property, it’s easy to see glimpses of what the new casino will offer. Parts of the floor are jam packed with slot machines ready to go. Meanwhile, areas such as Bar 360 and the food court still have a lot of construction left to finish.

Speller said that despite some early remediation issues, including an excess of pigeons and asbestos concerns, construction has gone smoothly and praised the construction workers and the unions who have been working 20 hours a day (in two 10 hour shifts) for the last year. He said that the entire Times Square Casino floor would be operational when they open in October.

Resorts World isn’t focused solely on what occurs inside the casino either. A six-level parking garage with 2,500 spots is finished, and the company is working with the MTA to renovate the Aqueduct racetrack station on the A train. An important aspect of those renovations is building a connecting extension, so customers can walk from the station to the casino without braving the elements.

Speller said he is focused on creating a great gaming experience to keep customers in the city for their gambling needs.

“We estimate $5 billion leaves the state every year for commercial gaming,” Speller said. “We have an opportunity here.” As the first casino to open in the city, Speller said he believes the new casino may even begin drawing out of state visitors away from their home casinos.

The opening of the Times Square Casino is the first of a two-phase opening plan for Resorts World. Later in the year the company will launch the Fifth Avenue Casino on the second floor of the property, which will feature a more exclusive feel for select customers. The Fifth Avenue Casino will also have several dining options including Genting Palace, the company’s signature Chinese restaurant, and RW Prime, a steakhouse that will rival any in the city, Speller said.

Resorts World is also building towards becoming a go-to destination for concerts, special events and festivals. There will be 200,000 square feet of indoor and outdoor event space, which Speller said occupies a great need for a community lacking in space.

Speller also stressed the economic development the company has brought to the region. There were 1,400 construction jobs created and 1,300 permanent positions are expected to be filled. Speller said approximately 70 percent of the permanent positions are going to the local Queens community. Currently, of the 200 full-time staff members that have been hired, 70 percent are from Queens.

In a short question and answer session with Speller after the tour, the possibility of the state allowing table games in the near future was discussed.

“I can tell you Resorts World along with the New York Gaming Association is very supportive of commercial gaming at existing racetracks,” Speller said. However, he said the company was focused on opening the current casino and had no immediate plans to alter their designs to accommodate table games. But the company “will be able to respond quickly” if a constitutional amendment to allow table games is passed.

Speller stressed that Resorts World would continue to explore all of its options and work with the community.

“We’re going to be here a long time. We want to involve the neighborhood as much as we can,” Speller said.